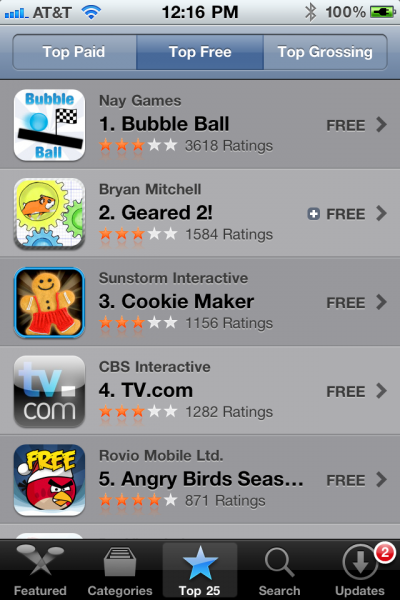 We’ve heard all the stories about billions of dollars passing through Apple’s App Store and seen the flashy intros of new apps from big publishers at conferences. But it’s stories like these the one of Robert Nay that really make me smile. Nay is an eighth grader from Utah who’s developed a physics game for iOS devices that’s currently the number one free app in the App Store. He did get a little help from his mother, but it’s still quite impressive that the duo from Utah can best established companies and countless venture-backed developers.

Bubble Ball is a pretty straight forward game that challenges players to move a bubble across the screen. Graphics aren’t fancy and there’s nothing 3D about it, but it does resemble some of the uber-addictive online Flash games of yesteryear.

Venture Beat and a lot of other online publications are making a fuss out of this 14-year old’s success in getting his game to the number one spot, but for every Rober Nay there are thousands of developers who see their free apps go nowhere. There’s a lot of luck with Bubble Ball, or any other app, involved topping the charts considering there are over 300,000+ apps in the mix.