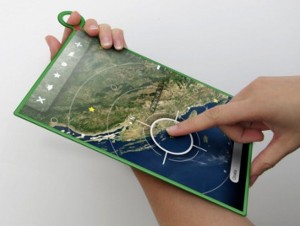 Say what you will about the realization of the One Laptop Per Child (OLPC) project, but the concepts to come out of it have made their impact on the computing world. Their first laptop, the XO, gave rise to the netbook market. The follow-up, the XO-2, is a beautiful, folding tablet that unfortunately never passed the concept stage. But that setback won’t stop them from dreaming big, as seen with their concept for the XO-3, an 8.5″ x 11″ wafer-thin tablet that may or may not be priced at $75 if it ever sees the light of day. Per Forbes.com:

Designer Yves Behar imagines the future of One Laptop Per Child’s educational computer for the developing world–the X0-3–as a minimalist slate of electronics that’s practically all display. The touch screen’s frame would be shrunk to a mere green rubber gasket. In fact, that new screen-focused form factor is just the beginning of OLPC’s monstrous ambitions: It aims to make its tablet PC highly durable, all plastic, waterproof, half the thickness of an iPhone and use less than a watt of power, with an 8-gigaherz processor. The price: an unprecedented $75.

Wow! All that for the slim price of $75?!? Yeah, we’re not going to see that by the overly hopeful date of 2012, but we’ll see it someday, and when that day comes, we’ll look back on the XO-3 and say, “I thought it was supposed to be $75.” Looks like a dream of a concept though. More photos on Forbes.