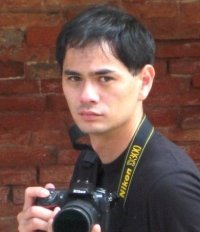 My mobile computing lifestyle has come a long way over the past decade. A lot of the gadget changes and upgrades were gradual, which meant I eased into what I and other geeks consider normal at the dawn of 2010. But during my trip to India this month I realized something – I live in the future. A lot of gadgets we dreamed about at the beginning of the decade actually exists today.

In 2001, I studied abroad for a few months in Thailand along with a group of about 30 students from Cal Poly. A group of professors, including Dr. Barry Floyd taught us all about business, technology and the Thai culture as we traveled through the country. I think this trip and my recent one to India serve as good bookends to my decade in mobile tech. I’ve thrown in a few other tidbits that I think other geeks will appreciate.

My parents were kind enough to fork over $2,599 for an Apple PowerBook G4 Titanium. They were very, very generous and wanted me to make the most of my photos and videos. The G4 Titanium was lightyears ahead of its time. It was incredibly thin and powerful compared to other machines on the market. It had a 400MHz processor, 128MB of RAM, 8MB of VRAM, a DVD-ROM and a 10GB hard drive. The G4 was rated to last for ‘up to’ five hours, but it never did. I didn’t get the optional 802.11b Airport Card because hotspots were so rare.

During my recent trip to India I brought my HP Envy 13 and MacBook Pro. My MacBook Pro has a 2.53Ghz Core 2 Duo processor, 4GB of RAM, 512MB of VRAM, 802.11n, Bluetooth, 500GB hard drive and a 128GB SSD. I ended up using the Envy 13 exclusively during the trip because of its portability and long battery life. Both of these machines are obviously much more capable than what I had at the beginning of the decade.

Getting Online When Traveling:

I still subscribed to AOL as my ISP because DSL was still a distant dream for many locales, including my home at Cal Poly. The $24.95 per month included unlimited dial-up time anywhere in the world. I was able to get online by using local AOL numbers in everywhere from Bangkok to Chang Mai to Nong Khai. When I didn’t have the G4 or a phone line I paid about 50 baht ($1) per hour at an Internet cafe. On a good day I’d have a 56k connection, sometimes only 28.8k or 14.4k connections were available.

Forget about dial-up or WiFi. I picked up a 3G modem from Reliance Wireless and was able to get online from just about anywhere. Coverage was spotty in a few areas, but I was able to get online while traveling in overnight trains between Mumbai and Ahmedabad . The service has speeds of up to 3.1mbps and costs about $2o per month. I did have to invest in a 3G modem to use on the network.

When I’m at home in San Francisco or traveling in the U.S. my Novatel MiFi card my best digital friend.

At the beginning of my trip in Thailand I was using a Minolta Maxxum SLR. It was so hot that some of the seals and the electronics failed. I bought a Nikon F100 and used it for the rest of the trip and for several years after.
In order to get images onto my PowerBook and edit them in Photoshop I brought a Polaroid 35mm scanner, complete with a bulky SCSI cable.

My workflow consisted of shooting Fuji Velvia film that cost about $10 per 36-shot roll, having it developed and mounted for about $5 per roll and then slooooowly scanning it. I’d have to wait a day to five days to getting my shots onto my computer. At a cost of about 50 cents per shot I didn’t take nearly as many photos as I wish I could have. Changing ISO speeds often meant having to burn through a partially used roll.

My video camera at the time was a Sony DCR-TRV820, which recorded digital video onto 8mm tapes. The camera had a built-in printer that could spit out wallet-sized prints. The feature was a gimmick, but I was able to leave behind photos with a family that didn’t have any photos of their ailing father.

Sharing images with friends and family back home was done by email.

I bought a Nikon D700 and a Canon S90 just before my trip to India. Obviously both are digital, which means I paid nothing for taking over 6,000 shots. I loaded the D700 with a 32GB San Disk Extreme card that let me take about 1,500 images in raw mode or up to 15,000 in JPEG basic mode. I used the Canon S90 to shoot videos rather than the clunky camcorder I started the decade with.

I was able to view my images almost immediately after taking them, put together slideshows with Muvee Reveal of the days’ events and give them to my in-laws to share on a USB stick. I uploaded some of the slideshows and photos via Facebook to share with family and friends back home.

When I wanted to call home from Asia in 2001 I just picked up a phone. I used an AT&T calling card and various other methods to call family on land lines. I remember the calls costing up to $1.50 per minute. Some of the Internet cafes were just starting to offer VOIP via desktop machines. I tried using them sometimes, but the bit rates were low and the call quality was horrible.

I didn’t have a cell phone on the trip and even if I did, none of my friends had one for me to call.

I brought my unlocked Blackberry Pearl and my in-laws gave me an !dea SIM card so I could stay in touch. It cost about two cents per minute for local calls and about 12 cents per minute to call the U.S. I occasionally used Skype to place calls from my Envy 13.

Now, just about everyone in India and southeast Asia seems to have a mobile phone.

When I was in college I had a Motorola Startac. It was the coolest phone I’d ever seen when I bought it. I also carried a Palm Pilot III and really liked Graffiti. I loved the device so much that I showed it to whomever would stand still and listen to me talk about how someday everyone will carry something like this. People would mostly laugh at me when I pulled gadgets out of my pocket and tell me that only geeks would ever carry computers with them. I stopped showing the Palm Pilot to people at parties after a girl offered me her phone number, but reneged on the offer when I started to write it down with my Palm Pilot rather than on the back of a bar napkin as was customary in those days.

Today I rely on my iPhone 3GS for a lot of my mobile computing. And it seems like everyone carries something that can do more than just place calls. PDAs are pretty much extinct and the iPhone 3GS does way more than I expected any phone would ever do ever do back in 2000. The only thing that the iPhone doesn’t do as well as my old StarTac is place and receive phone calls.

At the beginning of the decade I subscribed to Metricom’s Richochet service. The company’s fairly large modems connected to hotspost that were attached to telephone poles, lamp posts and buildings in San Francisco and select markets. The service was like magic at the time, but Metricom went bankrupt and my modem was useless.

I now use a Novatel MiFi card with my Sprint 3G service plan. The Mifi card is my favorite gadget purchase of 2009 and pretty much shows off how far mobile tech has come this decade. It works everywhere I’ve tried in the U.S., uses a lithium-ion batter, connects to the web via 3G and to devices with WiFi.

Cost of Being a Geek

Back in 2000 it cost a whole lot to be a geek. Very few students had laptops and a lot of them didn’t have mobile phones. My PowerBook G4 cost a lot, but so did laptops with Windows. I remember seeing discounted entry-level Dell Inspiron laptops for about $1,500 back at the beginning of the decade.

Mobile phone plans cost a lot more on a per-minute and feature basis. Voice mail, call-waiting, Caller ID and other goodies cost extra for me. But I think I actually spent less than I do now. This was because we didn’t spend as much time talking on mobile phones or paying for expensive services like 3G.

Prices for gadgets, computers and phones have all come down tremendously. MacBook Pros can now be had for $1,199, less than half of what my PowerBook cost in 2001. You can get a wide variety of netbooks and laptops for under $600. My mind is still adjusting to todays’ mobile gadget prices. I sometimes laugh when younger geeks talk about $1,000 computers being a rip off and trashing companies for daring to charge triple digits for a phone.

While gadgets have gotten a lot cheaper over the decade, a lot of us are spending more money than ever on being a geek. I a lot a little at a time for subscription services, iPhone apps and other services.