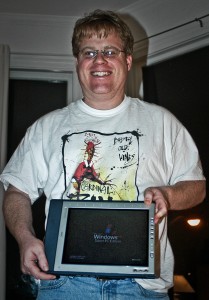 Robert Scoble, among many things, was once one of the biggest Tablet PC evangelists out there. He worked with NEC and then moved over to Microsoft and did his best to push the cause. That’s history, and then I guess this little voice rant is as well.

Scoble is pushing out some audio messages using an iOS App and service, Flipzu. And in the wake of today’s Nook Tablet news and the anticipation of the Kindle Fire launch next week he rehashes much of what has been said many times on the pages of GBM about how Microsoft failed with Tablet PCs and is going to have a tough road ahead of it once the Windows 8 Tablets roll around.

Again, there’s not much new here, but I thought it might be worth a listen in the category of “the more things change, the more things stay the same.” But then again, perhaps the playing field has changed so drastically in the last two years, the stakes might just be a different.