A Leap of Faith: From Early Adopters To The Mainstream

This sounds all too familiar to those who know and love Tablet PCs and UMPCs.

Moore argued that there is a gap that exists between the early adopters of any technology and the mass market. He explained that many technologies initially get pulled into the market by enthusiasts, but later fail to get wider adoption.

That’s a quote from a very interesting post on Read/Write Web discussing Crossing The Chasm, the name of a 1991 book by Geoffrey Moore, that then became a theory laying out the difficulty that OEMs have in bridging the gap between the enthusiasm of early adopters into the mainstream. 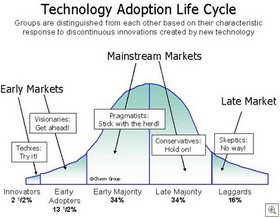 The article continues and wonders if that theory still applies in today’s fast paced climate (I almost would call it reckless) where new techonologies spin out very rapidly. Today’s shiny and new gadget replaces yesterday’s before the chasm can even be approached, much less crossed. In conclusion, the post’s author, Alex Iskold, thinks some adjustment needs to be made. I couldn’t agree more but I can’t offer a solution that seems practical.

No one would dare argue for things to slow down in the development of technology. What’s the point? It would be like shouting at a fast moving train. That said, I’m not sure what kind of adjustments one could make to the theory without applying some sort of braking mechanism on the process. How do you stop progress and initiative? How do you deal with a new product when the day you release it, the techology you build it on is already past its prime, and you’ve already shifted your company’s resources to the next big thing?

I hate to say it, but I think if we are looking at theories here, the closest one that fits today’s break-neck race in the technolgoy world is Darwin’s Survival of the Fittest.