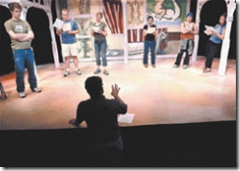 I’ve chronicled several times how (here, here, and here) I use my Tablet PC for note taking in my work, producing and directing theatre. My Toshiba M200 has become essential to my work and in fact using it has become second nature in rehearsal and meetings. After our recent production of Othello, I decided to take the plunge and go Vista with the release of RC1. The timing was good and I made the conscious decision that for our next project if I was having difficulty I would just resort to the old-fashioned legal pad and pen method. Heresy!

Well, I did commit a bit of Tablet PC heresy and take the analog approach for this show up until last night. Not that Vista and OneNote 2007 don’t work well enough to take notes. They do. But a lack of drivers for the M200 in Vista keep me from successfully suspending (or going into sleep mode as it is now called in Vista) and this is a key to controlling battery life in rehearsal, which can last 5 hours at a time. My Tablet PC is usually in suspend mode or I have the screen blanked until I need to take a note. It is also important to turn off the screen during blackouts so I’m not lighting up the area I’m sitting in when the stage goes dark.

So, I pulled out a legal pad and a pen. Funny anecdote there. Since the last time I used a legal pad for work at the theatre, our office manager has moved them to a different storage location and I had to ask someone where they were. I discovered the following while going analog:

Even my staff noticed I wasn’t using the Tablet PC, which tells you something. Well by the third act last night, (after using pad and paper for several rehearsals) I gave up and opened up the Tablet PC. I found myself much more productive in my note taking in the third act, and in reading the notes back to the cast, I felt my comfortable and confident about those notes than the ones that were on the legal pad.

In conclusion, this little experiment proved to me just how ingrained the Tablet PC has become in my process. I can go back, but that requires retraining and in fact giving up a few tricks that I really rely on. Even after I got into some sort of flow, I did not feel as productive or efficient. This week has been a big confirmation for me that the Tablet PC does in fact improve my creative process. I can’t go back.