As Apple fans will likely be lining up for the newest iPhone (and possibly iPad 3) within the next couple of months, we thought it would be fun to take a look back at where it all started. Courtesy of the internet time capsule Wayback Machine, we took a trip back to see just how Apple’s website has changed its approach to selling its iProducts through the last ten years.

The device that started Apple’s march into mobile dominance was the iPod.

When it launched in late 2001, the U.S. was still fixated on the 9/11 terrorist attacks, and airport security was the big headline of the day. Any news you could find about the iPod was buried deep in “Science/tech” sections of news sites. The news articles we did find about it were strict regurgitations of Apple’s PR about the device (the journalists obviously hadn’t bothered to spend any time with it before writing about it).

The landing page of Apple’s website, curiously enough, didn’t even highlight the iPod. Rather it chose to showcase Mac OS X “Puma” and Adobe Illustrator 10 (yes, Apple and Adobe once had a much cozier relationship). 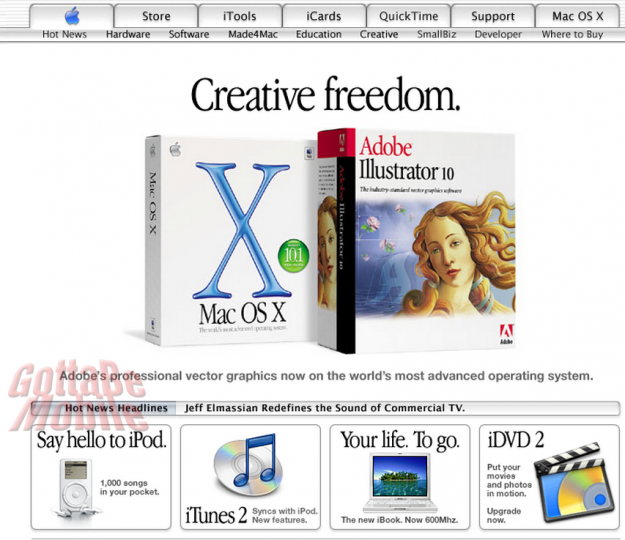 A rather unobtrusive “Say hello to iPod” plug filled one of the smaller windows at the bottom of the page. As it turns out, sometimes the most important news of the day arrives with a whisper, rather than a scream.

After clicking on the iPod link, you were taken to the iPod hub of Apple.com, where you can really see Apple’s approach to marketing its new portable music player: 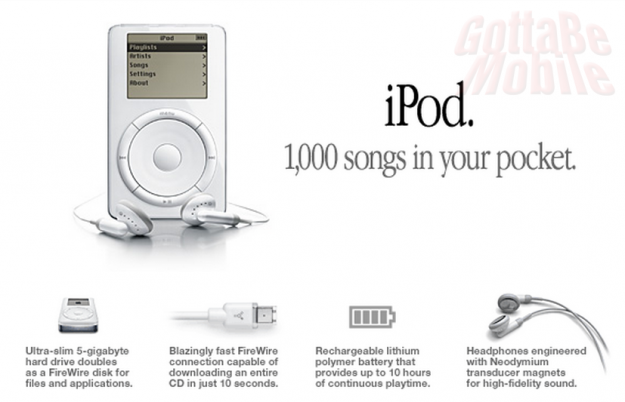 The original iPod’s sales pitch was “1,000 songs in your pocket.” That’s a very typical Apple way of saying that it has 5GB of storage. At launch, it was only compatible with Macs.

When asked about adding PC support at the iPod’s announcement, Steve Jobs said they were considering it – also quipping that “the experience probably won’t be as good.” Of course they added Windows compatibility in 2002.

The screenshot below shows that the track that Apple chose to highlight for the iPod’s launch was “All Star” by Smashmouth. My, how the times have changed. 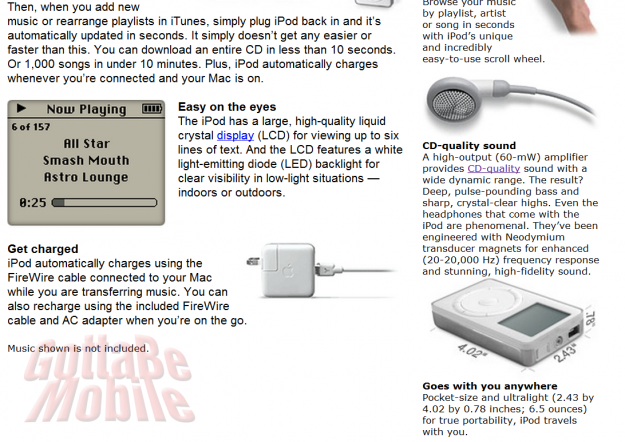 The screen grab above also highlights just how thick the first iPod was. If you have any doubt that Apple will keep making their iPhones, iPads, and Macs thinner and lighter – look no further than this. It was fatter than the thickest part of the 2011 MacBook Air. While it seemed thin at the time (it was marketed by Apple as “ultra-slim”), today it looks like a 1990’s shoebox cellphone in comparison to today’s portable iDevices.

Perhaps the most striking thing about this trip back to 2001 is the commercial that Apple used to promote the iPod. While seeing people dancing to their iPod’s music became a mainstay of Apple’s iPod commercials through the years, this one was clearly aiming for the geek demographic.

The lead actor in the spot is a far cry from the sexy young hipsters that became the staples of Apple’s iPod campaign later on. A 30-something man with dance moves that would get him kicked out of most clubs jams out to the track “Take California” by Propellorheads. You can see this bit of history for yourself:

As humorous as Apple’s first foray into iPod ads can be, it makes sense. Apple likely saw the Mac-using middle-aged demographic as the first step in gaining mass adoption of their music player. Young people weren’t going to just start buying a $300 MP3 player out of the gate. Get a foot in the door with those who are most likely to buy expensive Apple gadgets, then expand from there.

It worked out pretty well for them.

One detail we noticed relates to Apple’s designer Jonathan Ive. His cameo appearance in the iPod promo video from 2001 confirms that the fountain of youth does indeed exist, and he has it locked in his basement. Look for yourself, as you see what ten years did to the man – absolutely nothing:

Okay, maybe he did age a little bit – about three days. What is this guy doing? We want to know his secret so we can sell it to beauty magazines.

What a difference six years can make. In the summer of 2007, the original iPhone followed up months of anticipation and released to a public that was curious, excited, and skeptical.

At its launch, a London car bombing and the recent death of pro wrestler Chris Benoit were the big stories of the day. The iPhone’s release didn’t make CNN’s front page, but it did headline the Tech section with the post “iPhones Explode onto Market.”

A look at the Apple.com landing page on that day shows how much more Apple had riding on its mobile devices (compared to the barely-visible iPod plug six years earlier): 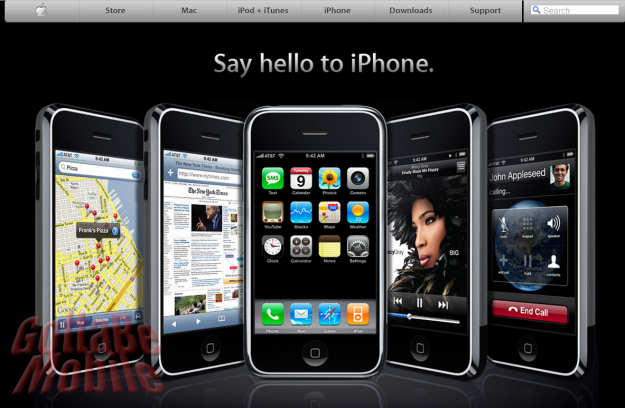 Showing us the barren homescreen, Macy Gray, and the first-ever iPhone call to John Appleseed, we are encouraged to “say hello to iPhone.” Interestingly, “say hello to iPod” was attached to the small ad back in 2001 as well.

Another interesting tidbit from the time capsule is how much more of Apple’s iPhone marketing on the site was via video clips in ’07. When the iPod launched in the dial-up internet days of 2001, text and pictures ruled the internet – so one commercial was all we got. By 2007, high-speed internet was everywhere, YouTube was a household name, and Apple (wisely) showed us the iPhone in action. 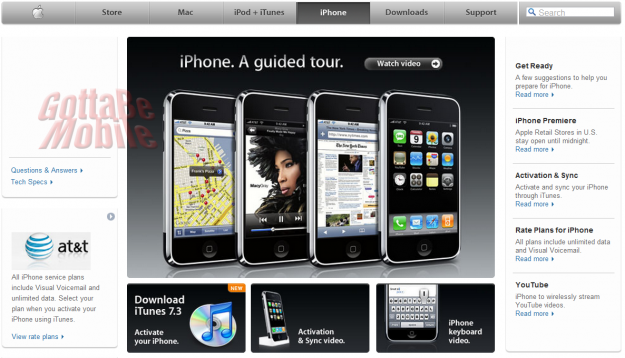 Apple.com/iphone on the launch day of the first iPhone

Another sign of Apple’s significantly-larger investment in the mobile arena is in the commercials for the first iPhone. Rather than one ad that was aimed strictly at middle-aged Mac users (as with the first iPod), Apple now had a legion of iPod users to target. They gave us four iPhone commercials at launch. This was long before the AppStore opened for business and “there’s an app for that” became their mantra. The first iPhone had a much more limited palate, which Apple sold as convincingly as they could.

The ads highlight the iPhone’s music, email, web browsing, and video watching capabilities. One entire spot was devoted to the iPhone’s “iPod” capabilites, reminding us just how much the portable music player was still their bread & butter back then:

The only chuckle-inducing part of those ads is the splashing of “the new AT&T” at the end of each spot (yes, AT&T was still in its early stages of the buyout from Cingular in 2004). Millions of urban dwellers had no idea of the dropped calls and connection headaches that were to come in the next few years at the hands of the US’ second-largest carrier.

Okay, so this one doesn’t take too much memory to recall, as it was only 18 months ago. But as the iPad has quickly become one of the most successful products in history, it’s easy to forget that it wasn’t yet labelled as a sure thing at the time.

Apple’s influence had taken over at this point. On its launch day, the iPad was the big news story of the day. “Before you Buy: 12 Things to Know About the iPad” was the main headline on CNN’s front page.

As Apple fans lined up at store across the country, this was what they saw if they navigated to Apple’s site. They were greeted with a dramatic view of the iPad that’s reminiscent of the opening exposition text of Star Wars. 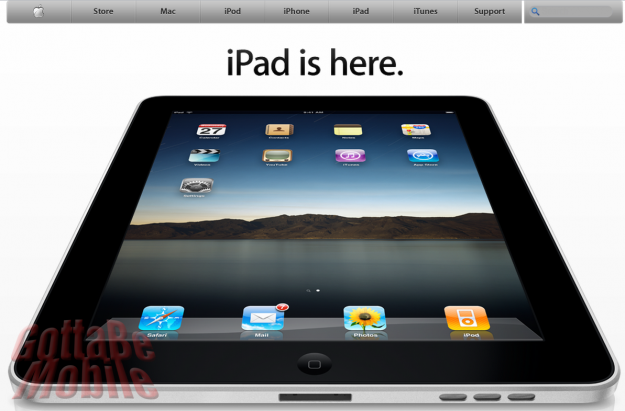 We won’t dwell on the iPad’s launch as its page doesn’t differ a lot from what we see today, but it does show Apple attempting to narrate a cohesive story of what the iPad can be used for: 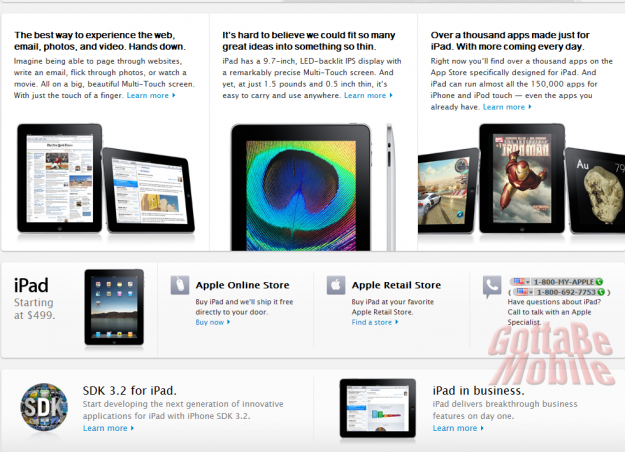 One item of note is Apple’s touting “over a thousand apps made specifically for iPad. With more coming every day.” It’s almost as if they had a crystal ball and were taking a dig at the future Honeycomb tablets when they were nothing but a glimmer in Andy Rubin’s eye.

Do Honeycomb tablets have that many tablet-optimized apps today, six months after the XOOM launched? On last check they still only had a couple of hundred. Now why are they getting utterly throttled in sales by the iPad again?