A missionary in Kosovo and his Life With Ink

In this installment of Life With Ink, Jeff Singfiel gives us a unique and fascinating look into the life of a missionary working in Kosovo and how Tablet PC technology helps him serve others. You can visit Jeff at his blog, Missionary Geek.

My experience with ink has probably been very similar to most readers of this blog, but my work environment is probably quite different.  I work for a faith-based organization in Kosovo, part of the former Yugoslavia.  In other words, I’m a missionary, and it’s probably the most fun anyone could ever have.  On any given day I may go from visiting with a very poor family out in a small village to a board meeting of an international  organization, or from writing a Bible study for a small group of local people to writing a grant proposal worth tens of thousands of dollars.

On most days my Lenovo X41 Tablet PC has become my brain’s expansion pack, to riff on Chris Pratley’s line about OneNote.   Maybe my Tablet PC isn’t “essential” or “indispensable” but I sure get a lot more done having one and I’d never go back to a conventional laptop.  I say this even though I probably use my Tablet PC in slate mode only 15-20 percent of the time.  But the venerable Pareto principle holds true — that twenty percent makes eighty percent of the difference. 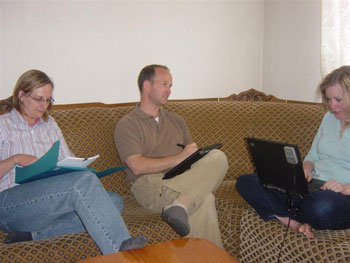 The place I feel my Tablet PC really shines is during meetings.   First, with a Tablet PC there is no physical barrier between myself and another.  Look at the picture to the right taken during a recent team meeting with my colleague which illustrates the options for bringing information to meetings. On the right is my wife, laptop propped up on her lap, consulting a schedule for an upcoming group of visitors.  The laptop screen is clearly a barrier.  Another colleague sits to my right, sorting through her pile of papers, searching for something she can’t quite find.

To be honest, I set up this picture, but only to a point.  I did say, ““Come sit by me because I need to take a picture for an article I’m writing.Ã¢â‚¬Â   What I didn’t set up was how my colleagues bring their reference material to meetings.  The difference is obvious; in one convenient, inconspicuous “tablet” I had all my budget figures, calendar, e-mail and project files.  When I need to reference something it’s always handy without thumbing through a pile of papers or turning my laptop into a personal privacy divider.  I’ve found all this to be true whether I’m in large meetings or small, or working in my native English language or my adopted Albanian one. 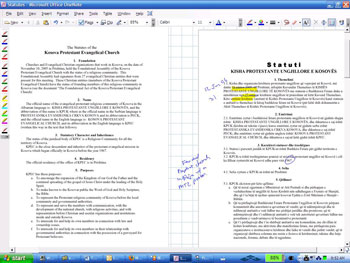 OneNote 2007 beta where I could view both languages side-by-side.  Not only did this make marking-up and editing the documents a breeze, but printing to OneNote 2007 also made both instantly searchable.  I can even search on the Albanian version of the document with no difficulty.

Another aspect of my work is to supervise renovations and reconstruction projects.  As with any project of this type it involves a lot of measuring, conferring with contractors, donors and team members.  The work is usually complicated both by the fact that there are few standard sizes or building codes to help along the way and that I’m not working in my mother-tongue .  Rooms are often not square.  Windows are often of different sizes, even within the same room.   It’s been so helpful to walk into a project with a digital camera and begin to snap pictures.  Those pictures are downloaded to my Tablet PC where I can ink the various measurements right on the photos.  It has saved me a lot of time re-measuring or trying to explain which wall or window I was referring to in a conversation with a team mate or contractor.

On the home side my wife and I wrestle a little bit as foreigners with educational options for our four- and seven-year-old girls.  Both are in local schools, learning the Albanian language, culture and subject matter.  At the same time we are home-schooling our seven-year-old in the North American system.  She loves it when I open my Tablet PC to illustrate a math problem or sketch out something I’m trying to explain. Now that a lot of home-school curriculum is available as PDF files they are easy to use in either PDF Annotator or OneNote.  Occasionally scratching things out on the Tablet PC turns a sometimes grumpy seven-year-old into a giggling learner.

During my down time I enjoy cracking open a good book…generally a good story.  The problem is that there aren’t many English bookstores in this part of the world.  I’ve read books on my Palm device for years and, while it’s great for fiction, it’s a pain for non-fiction where I want to underline, make notes and retain the marked up text for reference purposes.  The first non-fiction ebook I read on my Tablet PC was Scoble and Isreal’s Naked Conversations.  Rather than order the book from Amazon and wait two months for it to arrive, I just downloaded it and began reading, and did I ever mark that book up.  I took notes, highlighted, pasted portions into e-mail for my blogging friends…all without ever holding a paper copy in my hands.

Much of what I’ve describe here can be done with a traditional laptop.  I don’t even use the tablet functionality in my X41 all-day long and some days not at all.  But most days there are these niche tasks that are best, and most enjoyably done with pen and ink.  I think most people who try a Tablet PC would agree, whether they’re working in a corporate boardroom or for a humanitarian organization in a small, war-torn corner of Europe.