A New Old Voice at GottaBeMobile 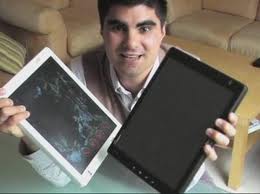 GottaBeMobile started out as a Tablet PC blog, right around the dawn of the tablet era. Though our coverage has branched out to cover all things mobile over the years, our tablet articles and reviews are still the most popular items on the site. We have some great tablet veterans here and as of today we’re adding one more to our list of contributors. Hugo Ortega’s a familiar name for those of you who’ve been following GBM for some time.

Here’s an older GBM InkShow by Hugo that runs for almost 40 minutes. As you can see, when he digs into tech, he really digs in.

While Hugo’s been away, he’s been busy selling Tablet PCs in Australia and even building his own devices. Hugo is a Microsoft MVP and a big supporter of all things tablets. You can find his first two articles here, where he discusses choosing a tablet operating systems and here, where he describes the state of the tablet market.