Cuil, (pronounced cool,) is a new search engine that opened its webshop last night with the marketing manifesto that it will be more comprehensive than Google. Started by a husband and wife team, Tom Costello and Anna Patterson, who are also former Google employees, Cuil is getting lots of press today, and of course, like most startups, had its problems out of the gates when the servers went down. That seems to be par for the course these days, but it was up and running this morning. 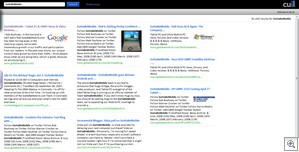 Regardless, it is too early to tell if Cuil will live up to its promise(s) and be cooler than Google, but I think the fact that it is getting some heavy hitting coverage points up that folks are either looking for an alternative to Google, or at least looking for a David to take on that Goliath. We’ll have to see how this story plays in the future.