So I was doing a little web shopping recently and discovered that my local Circuit City was now carrying Toshiba’s Satellite R25 Tablet PC. (They’ve been advertising them on the web for awhile, but I was surprised to see one here locally.) I figured I’d swing by and check this out for myself. Currently priced at $1499, this Tablet PC does pack a lot of horse power with a Core 2 Duo chip at a good price. The Tablet PC comes with 1gig of ram, a 100Gig HD, a DVD SuperMulti drive, and that Core 2 Duo processor is rated at 1.6GHz. And my first observation is that anything I tested moved along with quite a bit of snap. And the Vista Premium Capable sticker is prominently displayed. 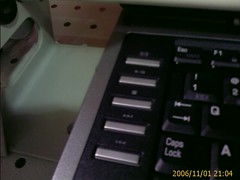 The Satellite line is targeted at consumers and after giving the machine a good look, I can see why. I knew, but wasn’t aware that the R25 comes with pre-configured with media controls adjacent to the keyboard.  Play, pause, fast forward, rewind, etc.. right on the case, which I think makes some sense in the big box consumer market. This addition doesn’t seem to affect the size of the keyboard as their is plenty of real estate on the case.

Perhaps it was the fact that I was in the store roughly 20 minutes before closing and their weren’t many customers, but I managed to get quite a bit of cooperation from the young sales associate, who allowed me to take the R25 out from behind its security bar and give it a once over. Of course we had to jump through a few hoops first.

Apparently someone had configured the fingerprint reader with their fingerprint which meant you couldn’t log on. Unless you rebooted into Safe Mode and disabled the biometric controls (which we did) and then rebooted again. Aha! We were in. Then of course we had to locate a pen. Because, they are afraid they will get stolen if they leave them in the machine. That took a few minutes (which gave me time to snap these pictures with my PPC 6700, sorry for the low quality.) Once the pen was located I flipped the screen around and gave it a once over. The sales associate was intrigued as I opened up Windows Journal and the Snipping Tool, saying he was always curious how that worked. So, I gave the obligatory demonstration. 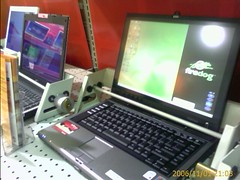 One thing of note (and I’m guessing not a good one) is that Toshiba and Circuit City seem to have cut a CRAPWARE deal. Several of the Toshiba utilities are displayed as animated icons on the screen under a Firedog logo, (Circuit City’s new tech support service.) This eats up a good 1/3rd of the screen and even with the default widescreen resolution at 1400×900 that is one heck of a lot of real estate to give up. (I’m sure there is a way to get rid of it, but give me a break.)

The R25 weighs in at 5.75 or 6lbs depending on which info you are reading (the website lists 6lbs the in store spec sheet says 5.75) and you feel every ounce. But this is a widescreen Tablet PC with an optical drive so the weight is not surprising. Compared to Gateway’s convertible though the case design feels slimmer and sleeker, and I dare say, the case feels a little flimsy. Toshiba’s screen protector film has never really bothered me on my M200, but it sure is noticeable here, more so in slate mode than in laptop mode. The sales associate was not versed on the Vista Express upgrade program. I didn’t even see any promotional material on the program anywhere in the department, and I didn’t press the issue given that I had already stayed past closing time. I did notice though that Office 2003 was pre-installed, which of course makes that $1499 price tag even more appealing.

As we were locking the R25 safely back under its security bar, my young friend said he was going to have to consider getting a Tablet PC now that he’s seen how they worked. I hope he hurries up, as the store only has one R25 in stock.

Another interesting fact. I still find it intriguing that Toshiba’s site doesn’t list the Core 2 Duo option for the Satellite.