A QUESTION OF ECOSYSTEM VIABILITY IN 2011

One of the many reasons Apple was able to finally jumpstart the tablet market (and stay on top of it for almost a year and counting) was their mastery of this concept of an ecosystem based device. Centralizing app distribution is huge and makes it easier for both consumers and developers, but there is also uniformity in design and execution in each of those apps that makes almost every app on an iPad instantly recognizable and easy to use.

Android, to some extent, has a similar approach that utilizes Google’s family of apps for out of the box functionality and the Android App Marketplace for expansion – and in short order, we will see just what those developers are capable of on tablets.

Both companies have shown that without a central ecosystem, commercial success is not easy. That’s not to say it’s impossible. I certainly hope that some of the upcoming Windows 7 tablets are successful, but by far the biggest buzz (and sales numbers) are attached to iOS and Honeycomb.

But, now that companies are realizing just how important the ecosystem model is (Nokia just dropped their in-house phone OS so they can integrate Windows Phone 7 on new devices), I wonder how many ecosystems we can support.

As consumers, the number is limitless. If there were five different tablet operating systems that provided tens of thousands of apps and centralized support, presuming the tablets were attractive and well-built, all five could be profitable. However, at a certain point, developers will only support so many platforms. The big names can always produce apps for multiple platforms. Evernote is available for PCs, iOS, Android, BlackBerry, Palm and Windows Mobile. Major game developers frequently port their games to Android and are starting to do so for Windows Phone 7. 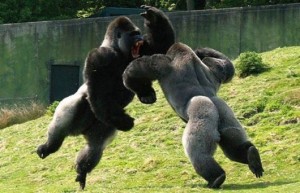 Survival of the fittest

My question then is this. Would RIM support or hinder its own developer community by supporting Android apps on the device? Creating a new ecosystem is hard and RIM has been pushing to get developer support on board since last fall when they first started contacting developers. Android support could easily undermine a dedicated community, but at the same time it could also increase interest in a device that would otherwise be very limited in applications when it first launches?

Ecosystem development is not easy and it takes time. The Motorola Xoom launched with fewer than two dozen dedicated tablet Android apps, but there will surely be more in the months to come. Do other companies have the luxury to wait for development to catch up or are we witnessing the start of a prolonged two horse race between iOS and Android on tablets?