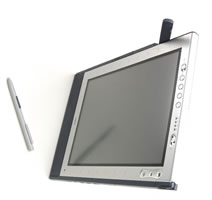 We received this email from a GottaBeMobile reader named Doug today:

““I’ve been using the NEC ultra  slate tablet, now about two years old, and love it for its 2 lb weight. I have long been surprised at the lack of press it got, and that NEC finally killed it. Any thoughts on why it had such a bad fate, and why we can’t get to that form factor now?Ã¢â‚¬Â

Good question Doug, you hit an old nerve with me there my friend!

I had the chance to play with one of these units (NEC Versalite, right?) in while at some meetings at Microsoft with other Tablet PC MVP’s.  One of the Microsoft guys brought it into the room and totally derailed a meeting.  Every one of the Tablet PC MVP’s (a group who really know Tablets!) absolutely drooled over it.  8.8 x 11.7, .59 inch thick, 2.2 lbs? Excellent!  I would have bought one on the spot, but it had a Japanese OS, and we were told that NEC was not going to release it in the

Huh?  Why not?  It was awesome.  They basically said that NEC had determined that the maintenance of a sales process in the was too high for the return they would get. I have since been made aware that it could be bought internationally, but I was just not ready to take that chance for service, etc. on an item that expensive.  I am sure you can get in in the U.S. now though.

I loved it.  Basically notepad size, and very light, I mean the thing would fit into your paper portfolio!  I have heard though that there were issues with battery life as well.  What has been your experience?  I would not have minded purchasing a couple extra batteries.  There were other limitations, such as 512mb RAM max, 933mhz Pentium III processor, 20gb hard drive as well, but I could have seen past each of those personally, to get such a great notebook size Tablet PC.  I honestly have to say that I still have not had my hands on a unit that felt any better than that.  If I remember correctly, it also came with a pretty cool slimline keyboard too.

Anyone at NEC listening?  Bring it back!  Update it to at least current processor levels, and I’m here with money in hand!

I too am disappointed that they went that route.  It is possible that Robert Scoble may have some insight into that, since he worked for NEC just prior to going to Microsoft.  I’ll ping him and see what he says though.

Thanks for writing Doug.

(Editors note: if you have a question for us at GottaBeMobile.com, email us as Doug did to get an answer.  We have developed a great list of contacts, and would love the chance to take a stab at getting you some answers!)