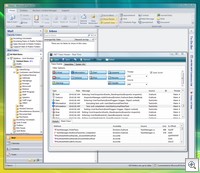 Tablet PC software developer extraordinaire Josh Einstein is looking for your feedback. Not only is he continuing his efforts on the must have Tablet PC application, TEO, he’s working on something new for Outlook 2007.(Click on the thumbnail for a larger view.) Here’s what Josh has to say:

Like many of you, I was pretty disappointed when it was revealed that Outlook 2007, my favorite application in the suite, would not be getting the ribbon makeover. At least not in the main part of the UI which is what we spend most of our time looking at anyway. The justification of course is that Outlook 2007 isn’t overloaded with commands the way the other Office applications are. I agree with that, but it does make Outlook stick out like a sore thumb and makes it seem like a red-headed stepchild instead of the first class Office citizen that it is.

So anyhow, I did something about it. But what I need now is feedback from you guys on what you would want to see on the primary ribbon tab and whether or not you would even use such a thing. I’m not planning to charge for it either. Here’s my prototype so far. I have no idea when this will be available for the public.

He’s started a thread and a poll in the GBM Forums for you to give him feedback. Keep in mind, Josh doesn’t know when he’s aiming to release this, and he’s looking at this as more than just a Tablet PC development. My $.02? This would be a grand idea.

Head over to this forum thread and leave your input.