A Second Look at the Adonit Jot Script Stylus: Sometimes You Do Get a Lemon

Last week I reviewed the Adonit Jot Script Stylus (the Evernote edition) designed for Digital Inkers to do some Inking on their iPads. It is designed specifically to work with the Evernote App, Penultimate, but will work with other iOS note taking and drawing Apps. I had no luck with the product whatsoever and demonstrated that in the video accompanying the review. The Adonit Jot Stylus is unique as it has a smaller tip to allow you better control over your Digital Inking than many of the styli that work with the iPad’s capacitive touch screen.

The folks at Evernote and Adonit saw the video and reached out to me. As I mentioned in that review it was possible I got a lemon. They thought so too and sent another stylus along for a second look. I took that second look, and it does indeed look like the original Adonit Jot Script I purchased was faulty. 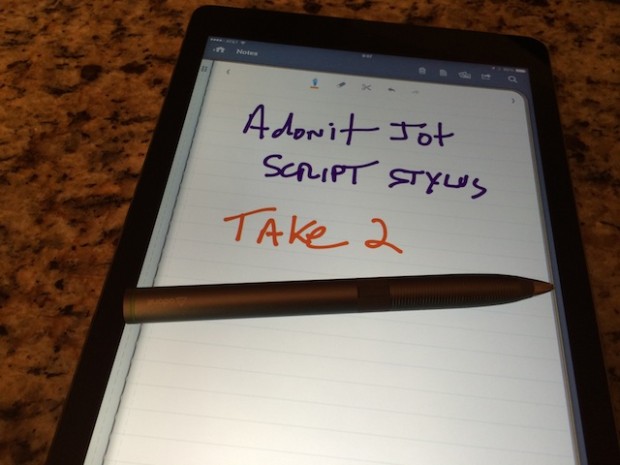 A second look at the Adonit Jot Script Stylus

This second stylus lays down Digital Ink in the way that the promoters of the product tell us it does. It’s not perfect. The wrist protection built into the software still does fail now and then causing an occasional skip, but it is a far better experience than it was before. Is it perfect? No. Is it the best Digital Inking experience on an iPad? It might be depending on your needs and your style of Inking. 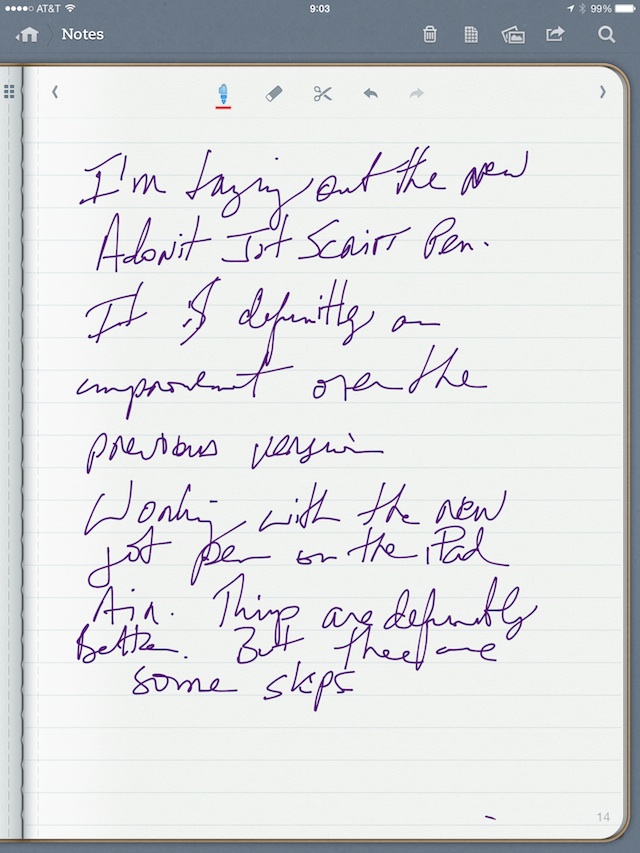 Inking with the second Adonit Jot Script Stylus is improved 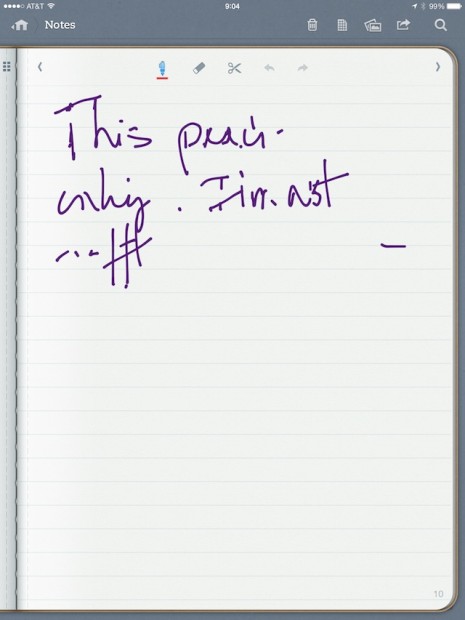 Inking with the first Adonit Jot Script Stylus was a mess

The Adonit Jot Script Stylus has several advantages. First, it feels like a real pen in your hand and is comfortably balanced. Second, the fine tip does allow for better accuracy, combined with the engineering behind the scenes. There is still work to be done, however. You’ll notice in the video below that I do get an occasional stutter or skip. Though this second stylus is far better than the first, this tells me that the issue most likely lies within the coding used for palm rejection or wrist protection. One of the reasons Penultimate is my favorite Digital note taking App is that the wrist protection is better than most other similar Apps. Given that there is an SDK available for developers to add the Jot Script to their Apps, I’m hoping we see improvement here in the future, both with Penultimate, and from other App developers.

That tells me I wasn’t the only one to receive a lemon. Curiously, when the second pen arrived the little plastic cover that keeps the battery from making contact had been removed from the barrel. That tells me someone checked out this stylus to make sure it was working before sending it along. If there is a quality control issue, than that needs to be addressed. No one needs to make a $75 purchase and have it not live up to expectations. If users out there who had similar experiences still have their Jot Script Stylus, I’d suggest contacting the Evernote Market or Adonit and asking for a replacement if you’re still interested in trying it out.

A bit of context here. I occasionally receive review units of new products. If I do I’ll mention it in the review. Normally, I purchase a product that I’m reviewing with my own dough. I purchased the original Adonit Jot Stylus through normal channels. That puts me in the same position as any consumer. This especially true when it comes to reviewing the many styli I have taken a look at in the past. With, I believe one exception, I purchased them all.

Also, there is no perfect Digital Inking solution for the iPad. The quest for one continues and I’ll support any developer who works towards a better solution. Some have made great strides so far and we should all encourage their efforts.

If you’re into Tablets and looking for a better solution you have two real alternatives. Microsoft still has the best Digital Inking solution. Although I don’t own a Surface Pro 2, I was impressed with the testing I did with one at a Microsoft Store. And Samsung’s Galaxy Note line of Tablets and smartphones have very good, and improving, solutions as well. These Digital Inking solutions usually come at a steeper price for the hardware because of the many moving parts to make Digital Inking come close to that natural feeling of writing with a pen on paper.  That will probably always be the reality.

To conclude this second look at the Adonit Jot Script Stylus, let me say that the folks behind this solution have done hard work and I give them kudos for reaching out and trying to correct negative criticism due to a faulty version of their product. They have an iOS solution that is different than other developers, and, for some, probably an excellent choice for Digital Inking. I’m now going to keep the Adonit Jot Stylus in my bag of tricks and watch for improvement in the software to see how things progress.