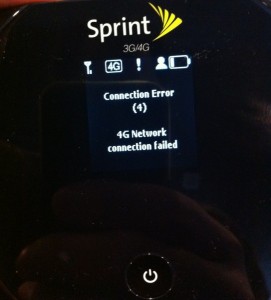 For the first time in five years I’m without a wireless modem, which means I can’t get online with one of my notebooks when I’m out of range of a fixed WiFi hotspot. I just returned my Sierra Wireless Overdrive to a Sprint store and am not on the hunt for alternatives.

I first picked up a USB modem from Spint five years ago, adding another line of service on top of my voice line. At the time I had a Palm Treo 650, which was in many ways ahead of its time. That Treo’s phone number is the same one I had with various Nextel phones, way back before Sprint acquired the company. Wireless modems have come a long way since then and I moved onto the Novatel MiFi a couple of years ago. The Sierra Wirlesss Overdrive was my latest and least favorite device.

I’d used wireless modems and hotspots for the past five years so I could work from anywhere. I used Sprint’s service so I could work from anywhere after leaving office life behind. While I usually work from my home office and studio, Sprint’s service has let me roam the San Francisco Bay area and the entire country. I was grandfathered into a truly unwanted plan when Sprint moved to 3G and put a 5GB cap on new customers.

Here’s a brief list of places I’ve used the service to work and play online:

So why did I leave Sprint? As I’ve written before, I was dissatisfied with the Overdrive’s performance. After seeing very slow speeds in Las Vegas in January and not being able to stay online reliably. Verizon’s 4G was a champ at CES, with speeds that exceeded those of our hotel’s WiFi network. I had 4G envy.

A couple of weeks after CES 2011 I returned my Sprint Overdrive to Sprint and asked to have my 3G MiFi reactivated so I could have a slower, but moe reliable experience. Unfortunately, my MiFi wouldn’t work on Sprint’s network. The lights came up green on the MiFi, but it wouldn’t get me online. The Sprint store manager insisted my MiFi was broken and that I’d have to get a replacement. I was working remotely in Palo Alto for the day and really needed wireless Internet, so I re-bought the Overdrive.

That fiasco was 30 days ago and I decided that I’d had enough Overdrive. I would’ve given sprint another shot, but the 4G version of the MiFi has been delayed until March 27, back from a promised end of February launch.

I dutifully paid my $35 return fee for a second time and walked away from the Sprint store without being a customer for the first time in almost a decade. Sprint treated me pretty well over the years and I’ll likely return as a customer at some point in the future.