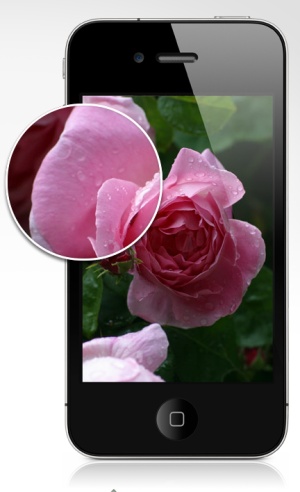 Been reading through reactions on the iPhone 4 this morning. One topic of contention seems to be Retina Display. Will it shrink everything? Will it create problems for developers? Will the iPad get it? Short answer to all: no. Here’s why.

In the comments here and on other sites, a few people have questioned whether the increased resolution will actually make reading more difficult. I’m sure we’re all familiar with how increased resolution works on PCs. You bump up the resolution, everything gets smaller. Here at work, that keeps most people from running their displays at the highest resolution. However, that’s not an issue for the iPhone because it already scales things to fit the screen. For example, the iPhone shrinks websites to fit the small display. That will still happen even with the 960×640 Retina Display. The content on the display will retain the same physical dimensions, shrunk or stretched to fit the 3.5″ display, but with more pixels per inch.

I’ve also read a claim that the increased pixel density will be a problem for game developers. Something to do with frame rate, increased need for processing power, etc. Normally this would be a valid point, but not in this case. Why? Because the iPad already does fine with gaming on its 1024×768 display and A4 chip. The iPhone 4 actually serves up fewer pixels at 960×640 but uses the exact same chip. Physical dimensions aren’t a factor. Thus, games should run smoother on the iPhone 4 than on the iPad.

Finally, James Kendrick, among others, ponders whether the iPad will get the same pixel doubling treatment. I doubt it. First, the previous concern over pixels and processing power would apply here. Running a 2048×1536 display I’m sure would require more processing power than the A4 can comfortably support. Second, the doubled iPhone 4 resolution eliminates the need for pixel doubling when running iPhone apps on the iPad. Future iPhone apps will be able to run on the iPad at their native resolution without being absurdly small, allowing developers, particularly game makers, to focus on the iPhone. Doubling the iPad’s resolution would undo that, and I’m 94% sure this was a consideration in their decision to pursue Retina Display.

Of course, as technology progresses, processing power will increase, paving the way for another doubling of pixels. But for the next couple of year sat least, I think we’ll be looking at the Retina Display only on the iPhone (and presumably iPod touch), not the iPad.