Accessories Listing Hints at HTC One for Verizon

All eyes are on the nation’s largest carrier as customers are awaiting to see if Verizon Wireless will announce that it will join AT&T Mobility, Sprint Nextel, and T-Mobile USA in supporting the HTC One flagship. According to one vendor, a listing shows that there are “in-stock accessories for the latest Verizon Wireless devices,” listing cases made by OtterBox, Case-Mate, and others for the HTC One.

The listing was posted by Phone Arena from an email from one of the publication’s readers. As this is from a third-party dealer and not from Verizon’s official retail channels, it’s uncertain at this point if this could be a typo or misprint, or if this is in fact the real deal. 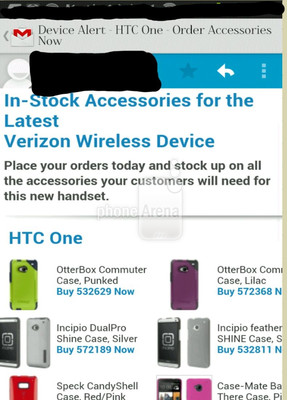 Phone Arena posts an email capture listing accessories for the HTC One for Verizon Wireless from a third-party wireless dealer.

Though Verizon Wireless has not announced the HTC One, there has much speculation that the phone will be coming to Verizon’s large 4G LTE network. At one point, HTC had even prematurely hinted that the One was coming to Verizon via a posting on social media, but HTC quickly removed the listing. Since then, there has been a lot of anticipation and speculation about the One’s arrival on Big Red.

The HTC One and Samsung’s Galaxy S4 are two of the most popular and coveted Android smartphones for the first half of 2013. Samsung had recently announced that it had shipped over 10 million Galaxy S4 worldwide in a month since the device had gone on sale. HTC announced that it had moved 5 million units despite component shortages and shipping delays.

Given that the Galaxy S4 is now just arriving on Verizon’s network, if the One does come to Verizon the delay shouldn’t be too surprising. Verizon had been notorious for thoroughly testing devices on its network so devices may not be the first to launch there. For those who do have the virtue of patience, you do have a reliable network with a very large LTE coverage footprint.

In the meantime, Verizon is still pushing its HTC Droid DNA, a phone with a 1080p full HD display, 8-megapixel camera, and a Snapdragon S4 Pro processor that’s seen as a precursor to the newer specs of the One. The Droid DNA is a variant of the international J Butterfly, and lately there’s been rumors that HTC may release a Butterfly successor later this year. This gives Verizon several options–it could either switch to the HTC One or wait for a successor that matches the Droid DNA currently available. Another option would be to expand its portfolio and offer both devices.