Sid Meier, the creator of the classic PC franchise Civilization has a new game coming to the iPhone and iPad that lets players control squads of planes in World War I.

Like Civilization and developer Firaxis’ last game XCOM: Enemy Unknown Ace Patrol is a turn-based strategy games. Players are given control of groups of early 20th century planes that they must use to take down enemy planes.

When talking to Polygon Firaxis associate producer Pete Murray said the game takes place during WWI because there’s a lot of “cool gameplay associated with it.” There is a wide variety of planes available during the era, each of which have different attributes. 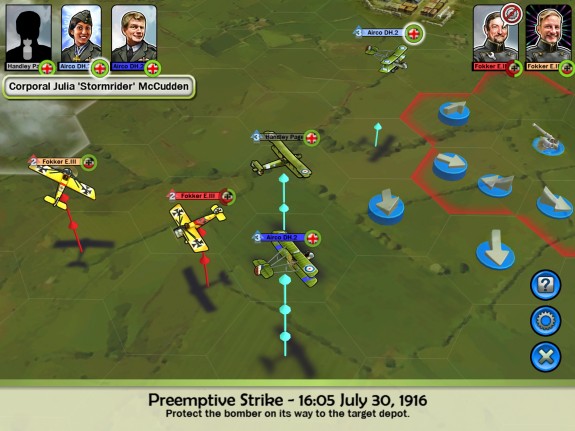 “Some planes were really fast and strong, but didn’t turn very well,” Murray said. “Some weren’t nearly as fast but were extremely maneuverable. So this gives you a bunch of different planes you can choose from in terms of how you approach the maneuvers.”

Meier and the team and Firaxis designed the game to offer a lot of depth that requires players think two moves ahead before maneuvering their planes. For example, players will have to keep their plans in groups so they can protect each other, but will have to find a way to break enemy planes away from the pack to defeat them.

Ace Patrol lets players train their own group of pilots to fly 30 planes across more than 120 missions throughout Europe. Pilots can level up to perform better over time, but also risk injury every time they participate in a dogfight.

The turn-based nature of the game means users can play with their friends asynchronously through Game Center. The game also has a “Hot-Pad” mode which lets two players play against each other on the same device, passing it between them between turns.

Ace Patrol will come to the iOS App Store on May 9 for free. The Tutorial comes free with the game, and those who like the game can choose to buy the British campaign for just $0.99.