Acer finally announced its new budget 7-inch Android tablet at CES, the Acer Iconia B1-A71, a Nexus 7 competitor that will cost “less than $150.”

The Acer Iconia B1 is the rumored inexpensive Nexus 7 competitor that was recently leaked online. The tablet has a 7-inch screen like the Nexus 7, but it has a 1024×600 resolution instead of the 1280×800 resolution of the Nexus 7. 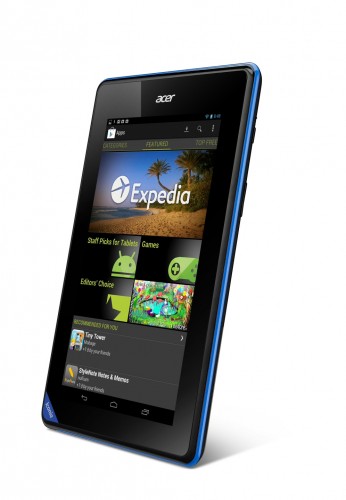 Acer claims the Iconia B1 is ideal for families looking to buy a second tablet for their children, or for busy executives who want a lightweight tablet to carry around. The first suggestion seems like a natural fit for an inexpensive tablet. The latter suggestion doesn’t seem right, however, as no executive would prefer this tablet over something like the Nexus 7 or the iPad mini.

Even at less than $150 the Iconia B1 will have trouble competing against the Amazon Kindle Fire which now sells for $159. The two tablets have relatively similar specs, but the Kindle Fire carries the Amazon brand which is more well-known than the Acer name.

The device will also have a hard time competing against even the $330 iPad mini which has access to more apps through the iOS App Store.

Acer didn’t announce a release date for the tablet yet.