Announced today, the new Aspire R7 notebook from Acer uses a new hinge to create a device that can be used in multiple modes. These include a notebook mode, a tablet mode and a display mode.

In addition to its “Ezel” hinge, which makes the device’s transformation possible, the device also includes a full 15.6 inch touchscreen display with a 1920×1080 resolution, Dolby Home Theater audio and new “Screen Grasp” technology that allows users to control the device with their fingers, similar to the way a user would if they were using Microsoft’s Kinect sensor.

According to the press release, the Aspire’s Ezel hinge is completely adjustable by the user. Users could begin using the device in a laptop mode and then disconnect the display’s bottom hinge to better position the screen for easier use of the device’s touch screen. The Aspire S7’s modes include Ezel mode, for using the device’s touch screen, Notebook mode for a traditional laptop experience, Display mode for flipping the screen over to watch movies, and Pad mode, for users looking to create a tablet experience. 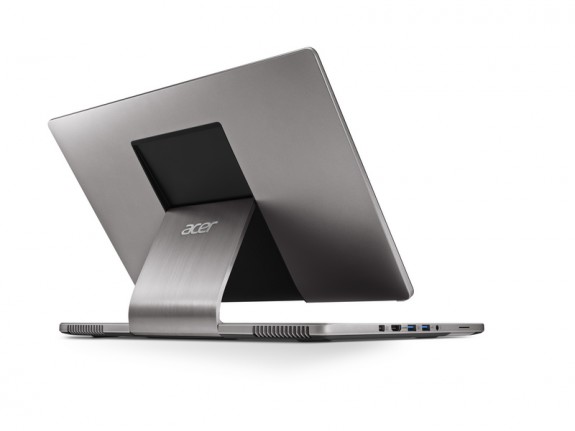 While there’s no word on pricing yet, the Acer Aspire R7 will be available in Best Buy’s retail stores across the country on May 17th. Those who pre-order between now and May 16th will receive a free copy of Star Trek: The Video Game.

Acer had hinted that it would be introducing a mobile computer with a unique hinge this past week with a trailer that depicted a laptop falling off of a steep incline interspersed with scenes from the next Star Trek movie. In that trailer. The laptop’s screen catches wind, revealing its unique hinge.

The Acer Aspire R7 is the latest form factor to attempt to bridge the gap between traditional computing devices, like the laptop and desktop, and tablets. Until now the company hasn’t shown that it’s willing to innovate much in the form of portability. All of its computers carrying Microsoft’s Windows 8 operating system have come in the form of laptops and tablets with multi-touch enabled screens. While adding these touchscreens was seen as a step in the right direction, all of Acer’s competitors had found more acclaim in shipping devices that effectively blend the form factor of a tablet and a laptop computer, like the Dell XPS 12 and Asus TAICHI.

As shipments of personal computers decline in the face of tablets, traditional computer manufacturers will need to continue creating more tablet-like user friendly form factors or risk ceding more of the personal computing market to devices like Apple’s iPad.