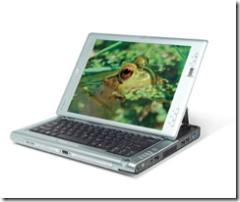 GottaBeMobile.com has received word from an “industry source” that Acer has discontinued its C310 Tablet PC and C200 Tablet PC.

There is no official word if they plan on replacing those two models with new models, or if they are gettting out of the Tablet PC business altogether.

The C310 and C200 will be available through channel providers while stock lasts.

Update: I just got this in from Linda at TabletPC2.com:

from two  contacts at Acer, But you never know this could change again.