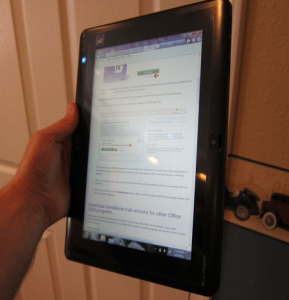 The Acer Iconia Tab W500 is an affordable Windows tablet that brings back memories of Tablet PCs of yesteryear. At just $549, this Windows tablet is in the same price range as its iOS and Android counterparts.

Rob Bushway, the co-founder of GottaBeMobile, got his hands on an Acer Iconia TabW500 and posted a review over at his personal site (RobBushway.com). Rob’s kept a close eye on the world of tablets long before the iPad was a glimmer in Steve Jobs’ eye.

Unfortunately, the Iconia Tab W500 needs some more fine-tuning before Rob will buy it or recommend it to others.

Windows tablets have been overshadowed by the barrage of Android tablet releases and iOS news. As we mentioned just yesterday, there are plenty of Windows tablets available for purchase today, but Rob’s comment about the Iconia Tab W500’s battery life points to a major downside of opting for a Windows 7 tablet. While Windows tablets can run full desktop applications, the overhead of running Windows means you’ll need to plugin before a full day of work is done.

Rob also mentioned the TC1100, an early Windows Tablet PC that has a cult following. The TC1100 had a small keyboard that could be detached or folded flat against the rear of the tablet, allowing the user to convert to slate mode without having to detach the keyboard. The keyboard design worked wonderfully and I have no idea why HP or one of its competitors haven’t resuscitated the design.

Visit RobBushway.com for more of Rob’s thoughts on the Iconia Tab W500.