The New Acer Jade Primo could wind-up being the iPhone 6 rival the rest of the world needs. Months after Microsoft first showed off its Continuum for Phones feature, Acer has revealed the first official device that’ll take advantage of it. The Acer Jade Primo is a smartphone, that can replace a Windows PC.

Acer announced its iPhone rival at IFA 2015, the European gadgets and technology trade show that brings big-name device makers together with media outlets to showcase their latest work. The Acer Jade Primo was the start attraction at Acer’s briefing.

The device itself has many of the features buyers expect of an iPhone rival. Inside is a 21-megapixel rear-facing camera with Dual LED flash for picture-taking and a spacious 5.5-inch AMOLED display. The device is powered by a Qualcomm Snapdragon 808 processor, a pretty powerful mobile chipset. It’s not until on-stage presenters paired it with a companion dock that Acer’s “Your pocket PC” tagline made complete sense. 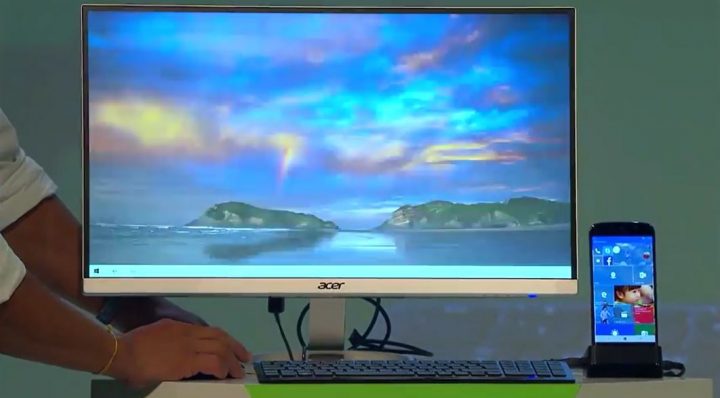 Snap the iPhone rival into a dock and it becomes a sufficiently usable PC. The dock itself has ports for connecting to monitors and providing the device with power so that users can continue to charge while they’re working. The Jade Primo’s Windows apps are supersized, just like the user is running a regular version of Windows 10 on a notebook or desktop PC. Everything from Outlook Mail to the Windows Store and People app all look and behave like their counterparts on regular Windows 10 devices.

According to Microsoft, the Acer Jade Primo and Windows 10’s morphing trick relies on Universal Windows apps. In the run up to the launch of Windows 10 Microsoft’s teams rewrote all of their Windows 10 apps to take advantage of new features. Windows 10 apps can be resized at will and are made specifically to refresh themselves with an appropriate design when it is needed. Even with the feature on, users can answer messages and take phone calls on their Acer Jade Primo.

For Windows phones to survive, Microsoft is effectively treating them like any other Windows form factor. The more Universal Windows apps there are the more likely it is that businesses can replace the smartphones and desktop PCs they issue with just one device.

Strangely enough, Acer didn’t announce the Jade Primo release date. It also didn’t reveal pricing on the dock users will need or the iPhone rival itself. Presumably, Acer will have more to share about the phone and more at Microsoft’s IFA 2015 briefing on Friday.

The Acer Jade Primo is the first iPhone rival to officially run Windows 10 and include support for Continuum, but rumors indicate it is not the only one coming. Microsoft itself confirmed that only phones made specifically for Windows 10 Mobile will get to use Continuum for Phones. The company also confirmed that it has new “flagship” smartphones coming to compete head-to-head with the rumored iPhone 6s. In recent weeks, information about two of these iPhone rivals has leaked.