Following a highly publicized post at WP Central that Acer would quickly release a newly revised Iconia W3 tablet based on Microsoft’s Windows 8 platform that would incorporate a better and improved display, we had reached out to Acer and the company confirmed that this isn’t the case.

“This rumor is false,” an Acer public relations representative told GottaBeMobile when asked if there was any truth to the claims, and how the company intends on handling orders already fulfilled for early adopters to keep early buyers happy if it does release an update.

“Since the introduction of the W3 at Computex, we began offering the Iconia W3 to users who are looking for a device matching fun and productivity, and will continue to do so. The Iconia W3 is the first 8.1-inch Windows 8 tablet.” 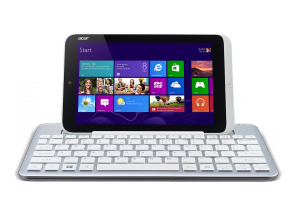 WP Central had re-published a report from Dutch language Tablets Magazine stating that a better display with wider viewing angles and better brightness would be coming the future:

“The new version of the Acer Iconia W3 according to the company has a better display, probably with the IPS technology to provide higher contrast, better viewing angles and higher brightness.”

Unfortunately, at this time, the W3 will continue to be sold unchanged, but not all hope is lost.

Despite Acer’s PR department denying the reports, it looks like Acer may be keeping its options available for the future, noting that they “don’t comment about future product plans.”

When pressed on for a full confirmation that there in fact won’t be a new Iconia W3 with a better display, Acer gave us a coy statement: “All I can say for now is that I can’t comment on future product plans one way or the other.”

So while we have a flat out denial of a newly revised display for the Iconia W3 form factor for now, the future may still be opened for Acer to update the display. If and when that does happen, though, we’ll keep you informed.

The Iconia W3 is the first Windows 8 tablet to sport an 8-inch form factor with its 8.1-inch display. Industry watchers are observing the tablet as it competes against Apple’s 7.9-inch iPad mini, Samsung’s 8-inch Galaxy Tab 3 8.0, and the Samsung Galaxy Note 8.0 slate.

The Iconia W3 does come with Microsoft’s Office productivity included for free.