With battery life being one of the most important aspects of a smartphone, many owners would like a better visual indicator than the old school and somewhat inaccurate battery status meter available on most smartphones. For those running Google’s latest OS, you can finally do exactly that. There’s plenty of apps readily available to give users a widget, or display this on the lockscreen, and now Google’s added it’s own option. Sort of.

Android 4.4 KitKat delivered multiple new features and changes to Google’s mobile OS, and one that many 3rd party manufacturers such as Samsung already offer is a battery percentage meter. Giving owners a much better visual representation or indicator of battery life, rather than a battery symbol that only offers 4-5 varied levels of capacity. Below we’ll explain how to quickly enable the battery percentage option in Android 4.4 KitKat, without hacking or rooting (like jailbreaking) your Android smartphone or tablet. 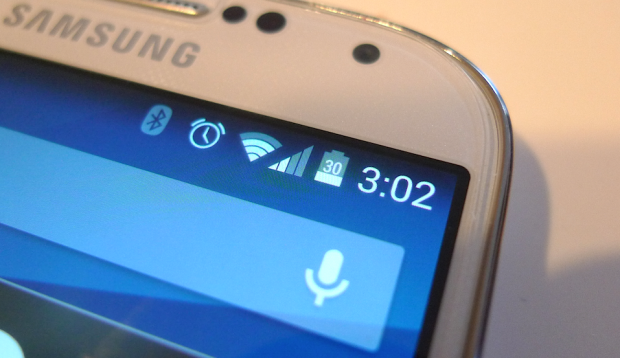 With Android 4.4 KitKat Google finally added a battery percentage meter that can nicely be seen in the notification bar at the top of your smartphone or tablet, but for whatever reason it isn’t the best implementation. Unlike others, Google put it inside the battery status, then they didn’t change the color. Meaning it’s the same new white font that replaced the Holo Blue on previous versions of Android. As a result, you can enable the feature, but you’ll only see the meter when the battery is low enough to actually display the numbers. As shown below.

Samsung’s Galaxy S4 and other recent smartphones have this option available right from the settings menu which will add a percentage value to the side of the battery, or replace the classic battery meter all together. For whatever reason Google didn’t take that route, and instead put it inside the battery. Having white on white hides it until you get to roughly 75% or so where you’ll start to see the top of the numbers. It’s odd, and most likely for developers only, which is also why it’s hidden and not a feature in settings. Instead of a quick option, we’ll have to explain how to add it.

How to Enable Battery Percentage

Most smartphones need to be rooted and hacked for users to change things in the notification bar, such as battery meters, color, and other things, and it appears that Google will slowly be adding these types of changes to stock Android. For now we can’t do much, but more options are coming. Without rooting or hacking your device the simple instructions below will add the battery meter.

There’s two different ways you can add a battery percentage to Android 4.4 KitKat, but the first option we’ll mention is the easiest. Instead of hacking your phone, or using the developer tool called ADB to push a command to your smartphone, a friendly developer from XDA Developers has released a simple app to complete this in one tap.

You’ll need to head to the Google Play Store and get his app called Battery Percent for KitKat, which will only work on Android 4.4 KitKat, and from here it’s pretty self explanatory. You’ll download and open the app, click the enable battery percentage, and reboot, and that’s all. It’s that simple and you’ll now see a battery percentage number once your battery drops low enough. 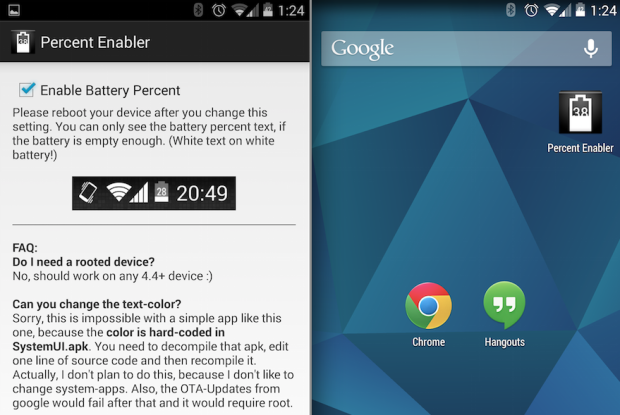 That’s it. Sadly we can’t change the colors or do anything else exciting without rooting and hacking the device, but at least the option is now extremely easy to access on Android 4.4 KitKat. According to multiple reports this is mainly a developer feature, and not yet finished by Google, which explains why it’s hidden and not an option in settings.

For those who’d rather not download one more app to their smartphone, a simple line of code in ADB will enable this feature as well. For the average user this isn’t ideal, which is why we mentioned the system above first, but the more advanced user can turn this on and off with ADB. This is a tool for developers to access Android, and thus, we can enable the battery indicator here with ease as well.

The ADB command to enable the battery percentage meter in KitKat is simple, just copy and paste this into the command prompt.

and that’s all. This will enable the same battery percentage indicator shown in the images above. It’s a simple step for advanced users, but we’d recommend the app above because it’s so simple. Of course, if you’d like to disable it the app provided is your best bet as well. Simple fire it up and uncheck the box shown above, then reboot again and you’ll be back to normal.

The battery percentage indicator is a nice addition that will give you a better idea of just how much juice your smartphone has left, but personally I find myself relying too much on it, instead of just enjoying my smartphone and its features. The option isn’t available by default because it appears to not be fully ready, or is simply a developer-only feature. The openness of Android though, means you can give it a try with our simple instructions above.

I’ve relied on 3rd party apps in the past, but this simple and quick tool is one of the best yet, even if the color is the same making the battery percentage meter hard to see. Give it a try, and enjoy a more accurate battery meter moving forward. This works on all Android 4.4+ devices.