Apple how to iOS

You probably have tons of contacts, and each of those contacts most likely have multiple phone numbers and email addresses (like their home phone number and their work number). Everyone has their own system on managing this kind of chaos, but iOS 7 makes it really simple and organized, and it’s really easy to add multiple numbers to a single contact.

Furthermore, you also have the ability to merge duplicate contacts if your current system involves one contact per phone number. That is, you have a Bob Smith with his home phone number and you have another Bob Smith that is his work phone number. You can easily merge these two together so that both numbers are listed under a single contact. Here’s how to do all of this. 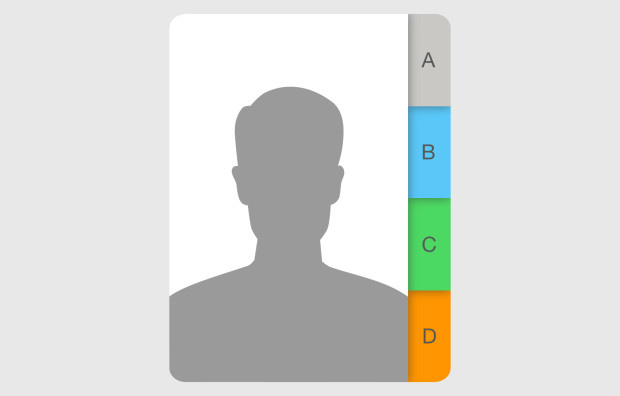 In iOS 7 (as well as previous iOS versions, you’re able to have multiple phone numbers and email addresses associated with a single contact. First, start off my opening up the Contacts app to see a list of all your contacts. You can also get to this same screen by opening up the Phone app and tapping on the Contacts tab at the bottom.

If you’re starting off with a new contact, tap on the + sign in the upper-right corner and enter in the name of your contact. Next, you’ll see a field that says add phone. Tap on that and enter in one of the contact’s phone numbers. Tap on home to the left to signify what type of number it is (home, work, fax, and even an option for iPhone). 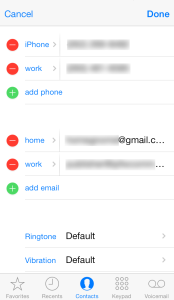 Once you’ve entered in the number and gave it a label, tap Done in the upper-right corner. You’ll see that contact’s number listed, and you’ll be able to add another number right below that where you see add phone again. Repeat the above process to add a second number and so forth. You can do the exact same thing with email address right below that.

This also works when editing an existing contact. Just tap on their name and hit Edit in the upper-right corner. You’ll then be able to add another phone number to the list.

So let’s say you’ve already dug yourself a hole and have duplicate contacts but with different phone numbers (because you didn’t know you could associate multiple numbers with a single contact). Not all hope is lost here. Simply just tap on one of those contacts to open it up, tap Edit on the upper-right corner, and then scroll all the way down until you see the section titled Linked Contacts. 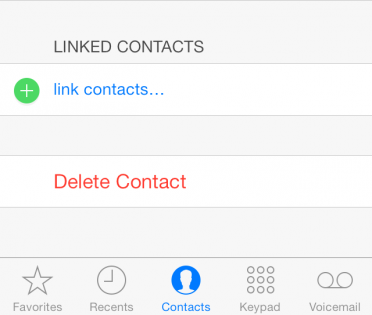 Tap on link contacts… to get started merging multiple contacts into one. You’ll then be given your list of contacts from which you’ll select a duplicate contact. Tap on one and then hit Link in the upper-left corner. These two contacts will now merge into one contact. Tap on Done in the upper-right corner to complete the process.