Added a Tablet to my Tablet 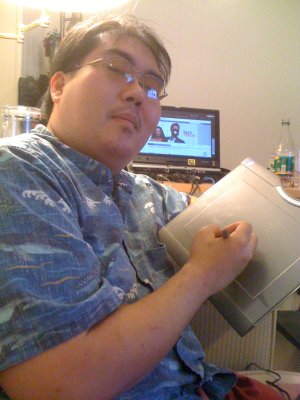 Me with a Wacom Bluetooth Tablet

With everyone getting jazzed over tablets recently  (or not), I started to get concerned that I, a  wholly devoted  Tablet PC fanatic, would no longer stand out in the crowd. My ink blogging has declined (something to do with another blog diverting my content). I’ve been using my iPhone as much, if not more, than my tablet. Sure, I’ve made, let’s say,  verbal overtures, but talk is cheap. What I need is a grand gesture, and what would be grander (i.e., more excessive) than adding a Tablet to my Tablet!

Yes, that’s me holding a Wacom Graphire Wireless, a Bluetooth-enabled pen tablet that lets me control my Tablet PC in the background. Overkill, right? Well, maybe the full plan will change your mind.

Okay, seriously now, this isn’t a permanent setup or some impulse thing. I’ve been shopping around for a Graphire Wireless for quite a while now and finally stumbled upon a deal I couldn’t resist. Suffice to say, it was on eBay and the price was the best I’d seen in months.

I’m using it in conjunction with my Tablet PC now because it’s my primary PC, but ultimately we’re going to get a dedicated media PC, and if there’s one thing I need for that, it’s  a remote control with pen input. I’ve been using my Tablet PC to play Hulu and Netflix streaming video on our TV. That means keeping it docked (as shown in the top photo), which means working it in my usual manner  of pen to  screen  is not feasible.

Been using a wireless  mouse and Air Mouse on my iPhone to control it, but it’s been clumsy. Air Mouse offers a variety of keyboard controls, but the motion control is not as precise as the touchpad, while the touchpad is, well, a touchpad and I don’t like  touchpads. The wireless mouse works normally, but I don’t keep a mouse surface on the couch, and  it’s purely cursor control. Simplest solution for me was to go with what I know: pen input. 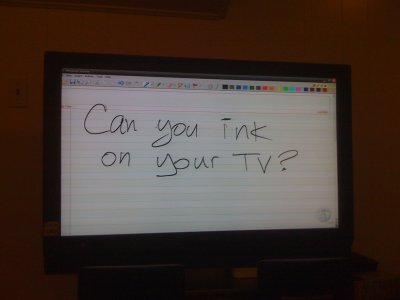 But controlling my home PC is still only half the plan.  I could also use pen input  work. I’ve done a lot to tweak my workflow on my work desktop and digitize everything, but I’m at the limit. To take it to the next level, I need pen input. 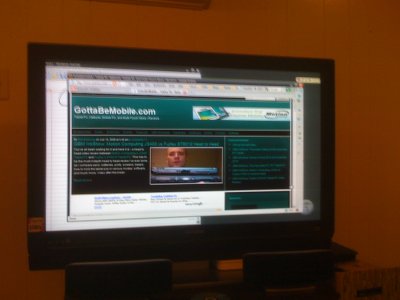 GottaBeMobile on my TV

The Graphire Wireless is not my ideal work tool, that would be a Wacom Cintiq 21UX (ideal, not realistic), but for something I can use and  carry between home and work, it’s the only option. The Bluetooth connection  was simple to set up and connects automatically after that. Nothing to plug in. Pretty much just  pick it up and ink.

I’ve only had a couple of nights to play with it, but the experience has been extremely satisfying so far. I wouldn’t use it for a lot of inking since it’s not as easy as writing on-screen,  but pen macros with ritePen have been great. Gesture control is wonderful. I think it’ll bed  plenty adequate  for the annotations I intend to do at work.  And  it works with the  Wacom penabled  enhanced graphics driver I’d already installed on my Tablet PC (sorry, this won’t work if you have a plain old touchscreen or N-Trig digitizer). It’s mobile, has wireless connectivity, and can enable pen input on any PC. I should have  added a Graphire Wireless to my  peripheral arsenal  a long time ago.