Unlike the Pebble, Samsung Galaxy Gear, and other smartwatches before it, Adidas’ new $400 sports watch offers a lot of smarts to fitness enthusiasts but lacks the connectivity built into its rivals. Not only does Adidas’ offering costs some $100-$250 more than its competitors, the watch is a completely standalone product that does not require an accompanying smartphone to sync, nor are there complicated apps or notifications.

While this may sound like an under-powered offering for those who look to marry a wearable computing device to their smartphones, Adidas offers GPS, a heart rate monitor, and on-board storage to house your music. The heart rate monitoring is something that many smartwatches and wearable fitness products today do not offer, including the Galaxy Gear and the popular Nike+ Fuelband wristband. This will be an important feature to those who are working towards fitness goals while at the same time avoid distractions such as email and SMS notifications and other features that are deemed superfluous to the exercise regimen. 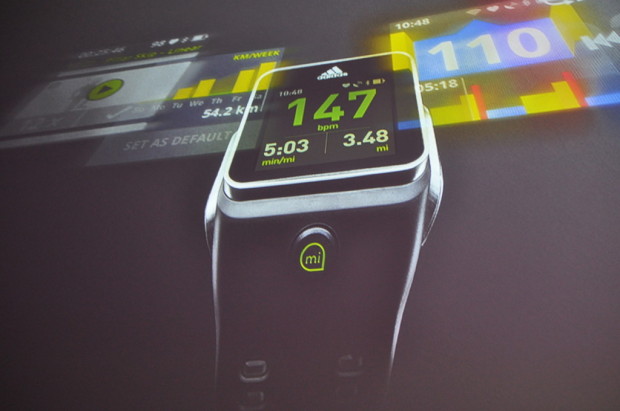 The watch will come to market on November 1st, but without an app to sync data from the watch to a smartphone.

The product appears to be very similar to Motorola’s MOTO ACTV smartwatch in the past, though the latter lacks the heart rate monitor while gains email, phone, and SMS notifications.

Adidas claims at this time that it’s not trying to target the smartwatch market, but that it wants to create the smartest running watch.

Still, without an active community like what rival Nike has done with its Nike+ fitness products, it’s unclear how successful Adidas will be in isolating the runner.

The watch was introduced at the GigaOm Mobilize conference in San Francisco, California today, according to GeekWire.