Every one of Adobe’s Creative Suite applications is now available for as low as $29.99 per month. Adobe’s Creative Cloud is a new subscription service that charges a flat monthly fee rather than forcing creatives to pay up to $2,599 for a box full of DVDs.

Adobe’s Creative Suite includes industry-standard applications such as Photoshop, Premiere and Flash Professional. The CS6 Master Collection costs $2,599 for a full license, but the applications can be purchased a-la-carte for specialists. Photoshop costs $699.99 for new customers  on its own. However, creative workflows often require more than one Adobe application, which means its more economical to buy a bundle.

If those prices sound high to you, you’re not alone. Adobe’s battled software pirates for years, with many citing the entry prices cost prohibitive. Others tired of Adobe’s endless upgrade cycle. Sure, loyal Adobe customers get a break, but a CS6 Master Collection upgrade license is $1,049 for CS5 Master Collection owners.

Creative Cloud members will always get the latest versions of Creative Suite Apps, including upgrades that won’t necessarily be available to those who purchase the applications outright. 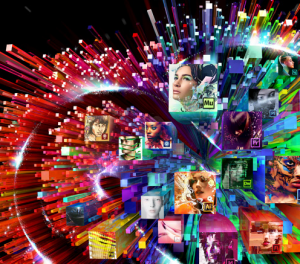 These are small prices to pay for this grade of software. Companies like Salesforce.com pioneered “software as a service” over a decade ago by selling subscriptions to business software that typically cost 10’s or 100’s of thousands of dollars to deploy for as low as $50 per user per month. Anyone with a credit card could set up a team of salespeople with professional tools with almost no commitment. Likewise, creative entrepreneurs now have everything they need for less than the cost of their cell phone bills.

The Creative Cloud  is a lot more than just the CS6 applications. Adobe throws in 20GB of online storage, which makes it easy to back up and share creations. The service also includes hosting for up to five sites, which means some customers can ditch their hosting bills. Another nice thing about Creative Cloud is that it allows users to install one copy of CS6 on a Mac and another copy on a Windows PC. While you can install CS6 on two machines if you buy the boxed software, they both have to run the same operating system.

There’s certainly a lot of value in Creative Cloud, but it might not be the right solution for everyone. For example, some photo enthusiasts may never have the need to run Fireworks or Encore. It may be wiser to pay $699.99 license fee for Photoshop since that’s just over a year’s worth of Creative Cloud fees.

Adobe’s executives made it very clear that the future of Adobe lies in subscription services. That makes a lot of sense as the days of $2,599 boxes of software are clearly numbered.