Apple wants you to use the iPad to create your verse. Adobe wants you to use your voice to do the telling, along with icons, text, pictures and music. Adobe’s new iPad App called Adobe Voice in many ways is the perfect, easy to learn story telling App that will let you create your verse on the iPad in ways Apple probably wishes it had thought of first. Adobe Voice lets you easily create short videos using your voice, music, icons, and pictures to tell stories, explain some things, or just have some fun creating a clever little snippet of something interesting. It’s simple. It’s clever. And I’m sure it will be a big hit. 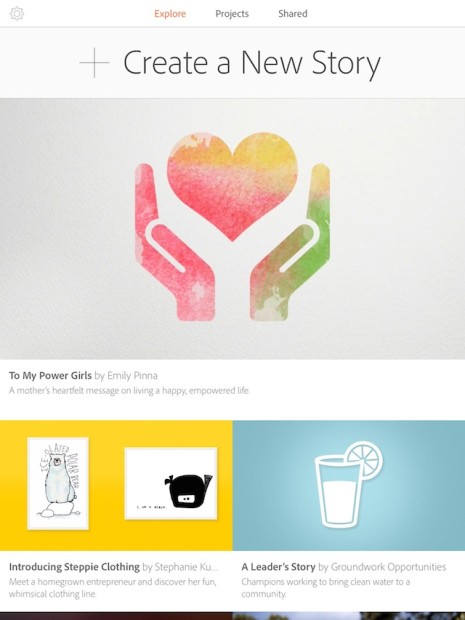 The principal behind Adobe Voice is story telling in a simple way. If someone told you to tell a story to share on the web you’d probably opt for shooting a quick video. That works, as anyone who has ever spent more than a few minutes on the web will attest. But not everyone is a budding cinematographer. Adobe Voice is a tool that makes the creation of a story with a variety of different assets almost child’s play. And its all done on an iPad and through Adobe’s Creative Cloud services. Children will love Adobe Voice. But adults are going to like it quite a bit as well. Here’s a first example:

Once you download the App you’ll need to set up a free Adobe Creative Cloud account if you don’t have one already. Then you’re good to go. You open the App and the tutorial greets you with an invitation to create your first story. 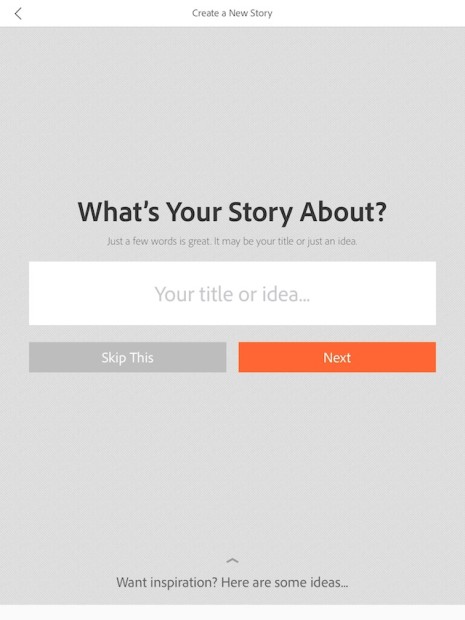 You give your story a name. Then you’re provided with some templates like Explain Something, Follow a Hero’s Journey, Promote and Idea, or Tell What Happened, among others. Or you can just go free form with Make Up My Own. 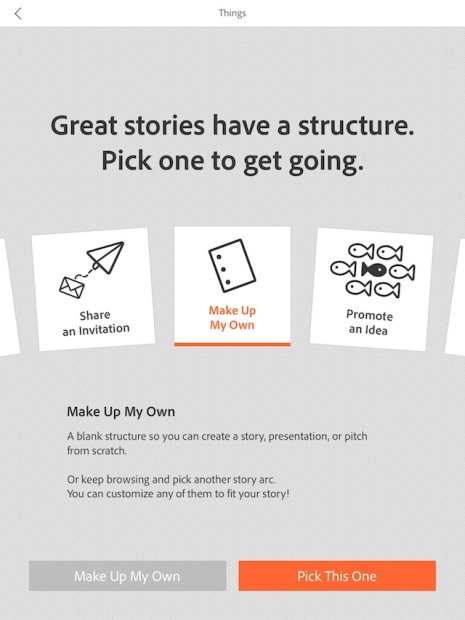 Once you’ve chosen a template the next screen brings you to where you start choosing or providing content. You have a choice between text, icons and photos. 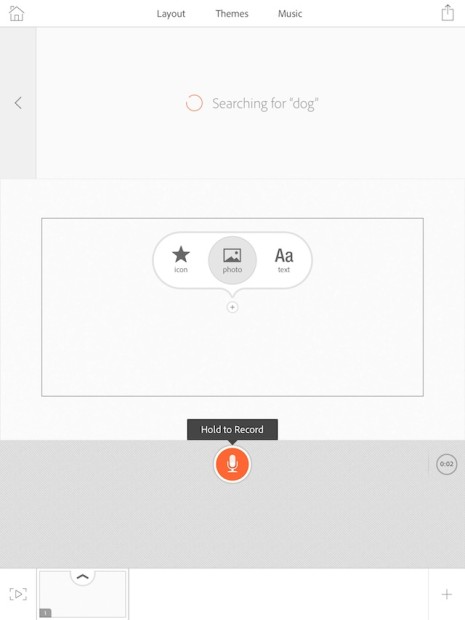 Adobe provides you with a seemingly endless array of icons and themes to choose from. Pictures can come from your iPad and photo albums, Dropbox, your Facebook account, or from the web. 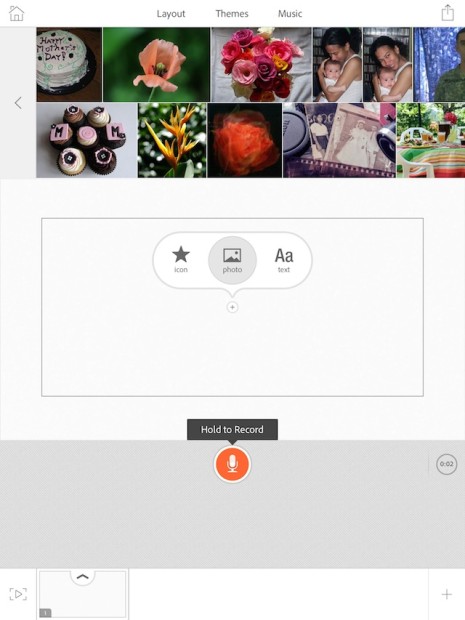 If you choose Find Photo instead of one of your own options or Adobe’s cloud, Adobe will search the web and return what it believes are royalty free photos that you can use under a Creative Commons License. The pictures returned for your search appear in a scrolling timeline at the top of your screen and you can search for quite some time. When it comes time to create the credits for your video at the end of your project, Adobe will provide the appropriate photographer’s credit if it is available.

There are several different layout options for how you want your visual images to appear. You can also add text or icons. The icon selection screen gives the appearance that the icons are static and very much like a cross between a WingDing font and clip art, but most of those icons actually come alive with animation in your video. 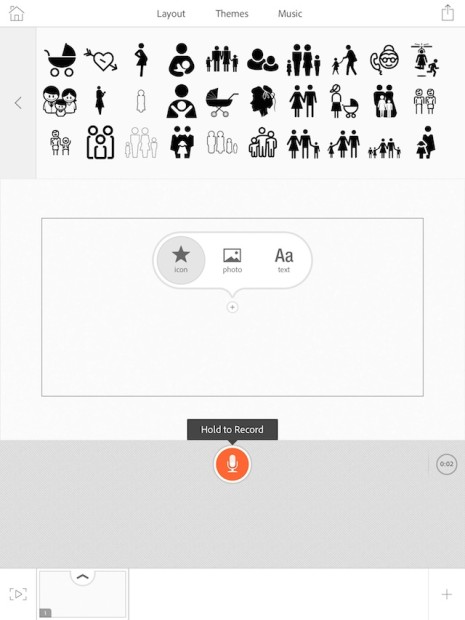 Adding voice narration for each slide is simple. You can record your voice speaking a message for each slide. You can do this over and over again until you get it right, but know that you can’t save version number 2, as you strive for perfection. The last one recorded is the one you’re going to use. How long you speak determines the duration that you’ll see the slide you are narrating on the screen. So if release the microphone button too quickly after you’re done speaking, the narration will occasionally sound clipped at the end and your slides will move rather rapidly.

You can also add music that Adobe provides. Most of the 35 provided tunes sound very similar even though there is a variety of musical styles to choose from. Adobe says that a future version will allow you to choose your own songs. 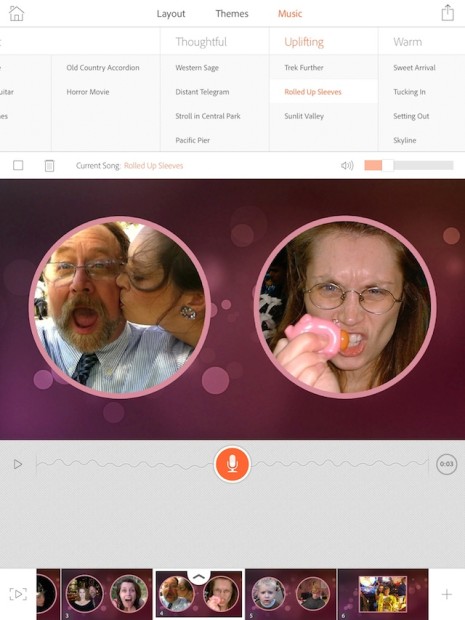 Once you’ve strung your pictures together with your voice and added some music. You can publish or share your video to Adobe’s cloud, Facebook or via email. The one big drawback is that you can’t save a local copy of what you’ve created. That’s a real bummer. 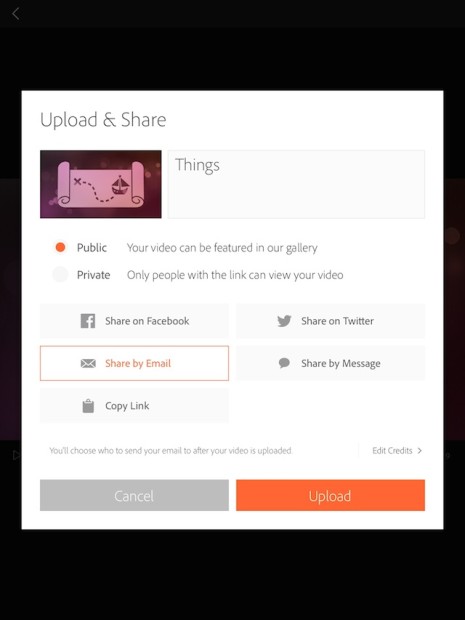 The final product looks like something between a slideshow and a video. In fact, many are calling this an excellent tool to create “explainer” videos of the kind we’re used to describing a new product on Kickstarter or other places on the web. That description is spot on.

Your other choices for sharing include Twitter and via Apple’s Message App. You also can choose to make your video public in Adobe’s gallery or keep it private and only viewable to those you directly share it with. Your videos can also be embedded in a website. I would imagine Facebook is going to see quite a few of these Adobe Voice videos in the days ahead.

Here’s an Adobe Voice video I made for my Mom who we’ve missed for quite a few Mothers Days now. It took about 10 minutes to create.

Adobe Voice is available in the App Store for free. If you’ve got young ones in the family, or even if you’re looking for a way to simply tell a quick story, you might want to pick up a copy. The learning curve is easy and entertaining to master. In some ways it feels like Adobe Voice and the iPad are a perfect match for those looking to create their own verse in a fun and simple way.