The ADT Pulse system allows its users to manage their home security system from any web browser or smartphone. The system wireless ties together security sensors, wireless cameras, smoke detectors and other electronics. The Pulse systems are more expensive than the free systems that are widely advertised and the monthly subscriptions starts at $50. 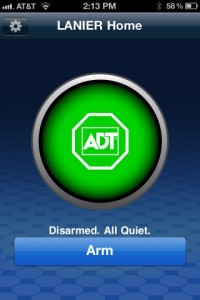 I had a basic ADT Pulse system installed in my house after an intruder broke into our home. Luckily, my wife alerted me to the noise at 5:45am and I was able to arm myself and run downstairs. . After clearing part of the house with a 12-gauge on my own, I stood guard over my wife and one-year-old son. Six police officers cleared the rest of the house when they arrived 10 minutes later. Fortunately all that was missing was my bike, which was recovered a week later.

We live in a very safe neighborhood where longtime residents insist ‘nothing ever happens.’ Police suspect a drug addict broke into at least three gates on our block while he knew residents were home that Saturday morning.

I would have loved to be able to look down at my iPhone in the midst of the break-in and known which doors and windows were open before I headed out of our bedroom.  I did a bit of research and ran across the ADT Pulse system. 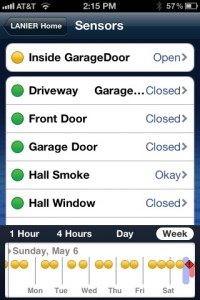 Fast forward a week and I had an ADT contractor installing motion detectors, smoke detectors, door sensors and panels. The security panel has a SIM card that connects to AT&T’s network to communicate with ADT’s home office and cloud services. The panel also wirelessly connects to the sensors and peripherals. Pretty fancy stuff.

When the installation was complete I installed the ADT Pulse app on my iPhone. I am now able to check the status of my alarm system on my iPhone from anywhere.

At the top of the screen is a list of any doors and windows that are open, followed by a list of secured sensors.  At the bottom of the page is a timeline that show when each door and window was opened and closed. This is useful even when the alarm isn’t activated as I used to double guess whether or not I closed the garage door before running out for a quick errand without my family. Now I can just look at the app to put my mind at rest. 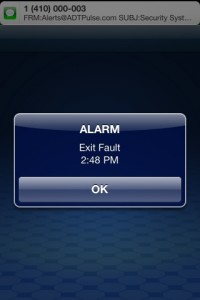 The ADT Pulse app displays status alerts when the alarm system is tripped. ADT customers can also request SMS alerts. Both kinds of alerts include information on which sensor is in question, which would’ve been exactly what I needed during the burglary at our house.

When the alarm goes off, ADT calls to make sure we’re ok and if police are needed. If we don’t respond, they place an emergency call to police dispatch. Needless to say, the alarm system and app give us some peace of mind.

Those with fancier ADT Pulse systems can use the Pulse app to view security camera footage in near real-time. Those systems were too rich for my blood and the touchscreen display is overkill for our needs.The Pulse system is expandable should we choose to add more sensors or features down the line. 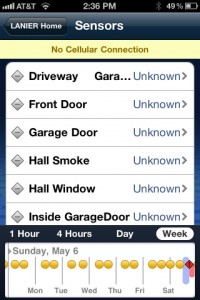 Overall the ADT Pulse app is easy to use and has a clean appearance. I’ve run into two issues so far however. When the app has trouble connecting to the Internet a ‘No Cellular Connection’ alert appears. It does not indicate whether the cellular connection problem is on the iPhone’s end or if the alarm panel is not communicating with ADT’s servers. Seeing as both ends are cellular, ADT should clarify where the fault lies.

Another issue is that the ADT Pulse app caches the recent alarm and sensor statuses. This means sensor and armed statuses are sometimes out of date and display old info if its unable to reconnect to the ADT servers right away. This caused a minor panic when I was out of town. I checked the alarm status on the app and placed my phone down on the table. Unbeknownst to me, my wife and in-laws were packing up the car in the driveway and had the garage door open for a few minutes. The app apparently got the message that the door was open, then lost its connection at my hotel. When I looked at the app an hour later it appeared my the door was left open. I called home and my wife wasn’t there. I checked in on my wife with the Find my Friends app and saw that she was about 40 miles away from home. I had my parents stop by to check in on the house and the garage door was thankfully closed. ADT really needs to force the app to give a clear notification that it’s unable to access the Internet rather than displaying outdated information.

Now that I understand these issues and limitations I’ve settled into using the app on a daily basis. I disarm the alarm before getting out of my car when I arrive home, which means I don’t have to rush to key in a code before the alarm sounds.