Those who claim that the iPad isn’t for content creation may have a slightly harder time making that argument now. Photoforge 2, a photography editing app that is more advanced than similar iOS editing tools, is now available for the iPad. Photoforge 2 released this spring as an iPhone app, but until now there had not been an iPad version. To sweeten the pot, developer Ghostbird Software has put the app on sale for $1.99. 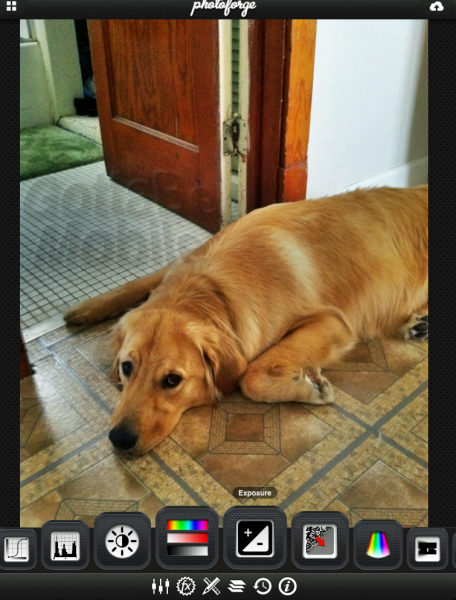 Now you can do more with your favorite pet photos.

While it’s still a far cry from using Photoshop on a desktop, Photoforge does incorporate more advanced features that have, up to this point, been absent on mobile devices. Primary among those is the ability to work with layers.

Having layers allows a user to stack elements of different photographs on top of each other. Once the layers are merged, it can create the illusion of a completely different image. Layer masks, which are the transparency levels of a layer, are also supported.

Among the many other tools included in Photoforge are auto-correct, exposure, levels, curves, color balance, HSL… the list goes on. Countless Hipstamatic-style effects are available as well, in addition to the more common cropping, resizing, and red-eye correction.

One feature that is missing that would make this difficult to replace Photoshop is the lack of an easy way to simply select parts of an image. When working with layers, an easy way to make a selection is essential. Without it, many tasks that are simple in Photoshop are now clunky, awkward, and downright difficult to do. Perhaps we’ll see support in a future update, but in the meantime, Photoforge 2’s feature list is far ahead of its competitors and currently can’t be beaten on iOS. You can get the universal iPhone/iPad app in the AppStore on sale for $1.99 here.