One of the themes that keeps surfacing in today’s age of technological disruption is how and from whom we receive our entertainment. Netflix battling Comcast is one of the latest in that string of stories. To put it bluntly, older entrenched interests don’t like newer methods of delivering content to consumers for a lower price. But that kind of disruption is  an age old story in any industry throughout the history of innovation. Sometimes the companies get to compete head to head and the best innovation wins. Sometimes the issues end up in court. Sometimes the best technologies lose.

Today, one of those newer technologies, Aereo had what some call its “last stand” in front of the Supreme Court of the United States. That case is also attracting interest because some say the case, ABC, Inc vs. Aereo, will affect not only the future of television, but also the future of Cloud computing. 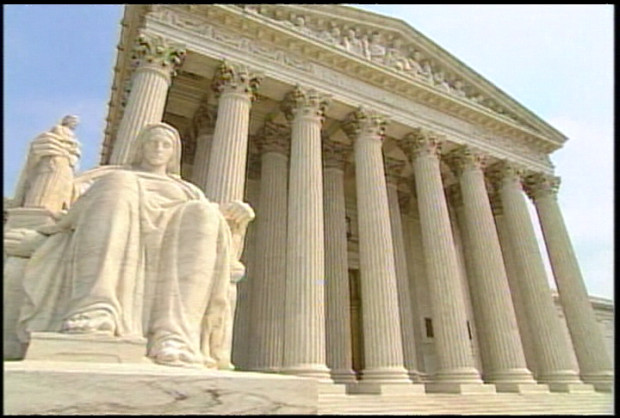 For those who don’t know, Aereo is a broadcast receiving and recording technology that takes television signals from over the public airwaves. That signal can be captured and recorded in the cloud and can be viewed or streamed via the Internet on mobile devices.  Another key difference in Aereo’s model is that users can only view content in their home viewing area. Again, the content that is being received and recorded is broadcast free over the air (yes that still happens) so we’re talking about mostly your local network affiliates that broadcast content from ABC, NBC, CBS, and Fox and others among a total of 50 networks that broadcast nationwide.

Aereo started out in New York City, but has been expanding its markets. It now serves 11 cities. That pace of expansion seemed to slow once impending court action got closer. Proponents of Aereo argue that it is not much different than setting up an antenna on your house to receive a signal. But then there’s that Internet streaming service piece of the puzzle that makes the issue a bit cloudier. 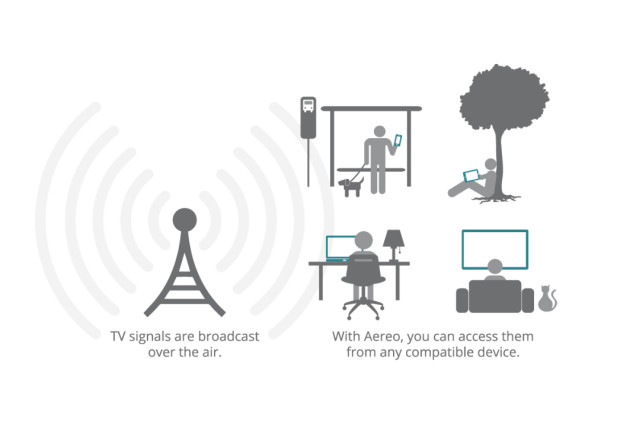 Obviously the networks and cable companies are not too thrilled with Aereo’s business model because they see it as a threat to their existing revenue streams. Cable and satellite distributors pay for the right to broadcast major network content. Some argue that Aereo could make cord cutting (cable users choosing to cancel their service) even easier given that  viewers could catch local programming and more importantly some sports programming, without needing a cable hookup. Local news and sports programming are often cited as impediments to consumers breaking away from cable or satellite.

Those old school media interests may be after Aereo as a disrupting business model, but some fear this case may have significantly more ramifications regarding cloud computing in general. More on that later.

This court case is being argued specifically over copyright issues. Network TV content is indeed copyrighted material and those that own it want payment for that content. Aereo says this no different than watching that same content from your living room via an antenna and a DVR.

That has been legal for quite some time. Similar battles were fought over VCRs and the Betamax decades ago. Aereo says that through a combination of a small personnel antennas and cloud based hard drives, the content its customers are receiving is a private viewing, not a public performance. If the court determines it is a public performance than Aereo loses its case. In Aereo’s view its technology does not infringe on the copyright claims. In the narrowest view, this case could and probably should be decided on the copyright issue alone.

Aereo has stated that if it loses on the copyright issue it will go out of business. Broadcast providers have threatened to pull their content from over the air broadcasts if they lose the case. Depending on what legal beagles you listen to Aereo either has strong legal legs to stand on or not. So, it is obviously not a cut and dry legal issue.

Supreme Court watchers today said that it was difficult to determine how the nine justices were viewing the case based on the questions they asked. Chief Justice of the Supreme Court John Roberts regarding the small personal antennas asked pointed questions of both sides. He asked the attorney for ABC if Aereo’s small antennas weren’t similar to what a consumer could purchase at Radio Shack, but then asked Aereo’s attorney, “Is there any reason you need 10,000 of them?” That question was echoed by Justice Ruth Bader Ginsburg. Of course predicting final decisions on the Supreme Court is almost like predicting Apple rumors of a new device. You know there will be one but that’s about it.

However, it did appear that some of the Supreme Court justices might need a little more experience with today’s broadcast delivery systems. Justice Antonin Scalia apparently needed to be told that HBO was not free over the air, but instead part of a paid cable package. 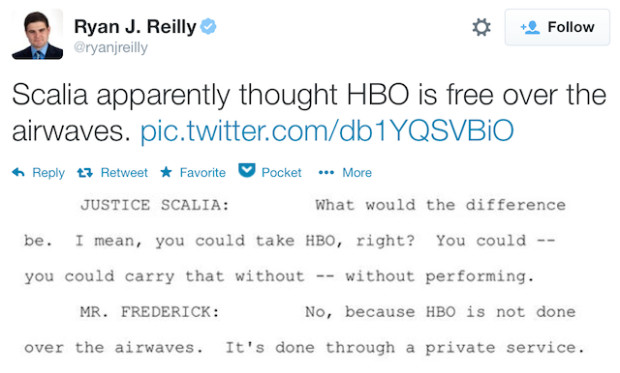 There are potential larger concerns with this case beyond the fate of Aereo. Several justices, by their questioning seemed concerned that a ruling could impact cloud computing in general. From Matt Schruer’s Why Aereo Matters to the Cloud:

The broadcasters’ case against Aereo attacks a key legal principle under which such services operate: if a user employs an online service to stream their own, lawfully acquired content to themselves from a remote location, this is a private performance that does not infringe copyright. Broadcasters, however, insist that “any device or process” that transmits works to the public makes a public performance, each of which must be licensed.  Because cloud services are a “device or process,” this calls into doubt cloud providers’ ability to give users remote access to their own content without securing licenses for every file in the cloud.

In other words, if you’re storing your legally acquired music or video in the cloud, some fear you could be prohibited from accessing that content depending on how the ruling of this case comes down. Keep in mind there are organizations out there would would love to see that kind of scenario.

Aero released a statement after the case:

From our perspective, the issue in the case was whether consumers who have always had a right to have an antenna and a DVR in their home and make copies of local over-the-air broadcast television, if that right should be infringed at all simply by moving the antenna and DVR to the cloud.

The court’s decision today will have significant consequences for cloud computing. We’re confident, cautiously optimistic, based on the way the hearing went today that the Court understood that a person watching over-the-air broadcast television in his or her home is engaging in a private performance and not a public performance that would implicate the Copyright Act.

This Supreme Court case will be decided and a verdict rendered in June or July 2014.