Apple’s low cost iPhone, which is rumored to launch alongside the flagship iPhone 5S this fall, is now shown with five different colors. Following an artistic rendering that we had written about, the low cost model is now shown in glossy colors for pink (or possibly red), yellow, white, blue, and green.

An image with all the rear back covers of the low cost iPhone was posted on BGR from Nowhereelse.fr.

By offering color choices so users can customize their iPhone to their wardrobe and lifestyle, Apple will be appealing to fashion-conscious younger audiences. Additionally, the phones, which will come with a polycarbonate plastic shell rather than the metal unibody casing on the flagship model, will be priced more affordably for younger, hipper users who may have more limited disposable income, reserving the flagships for business class users. 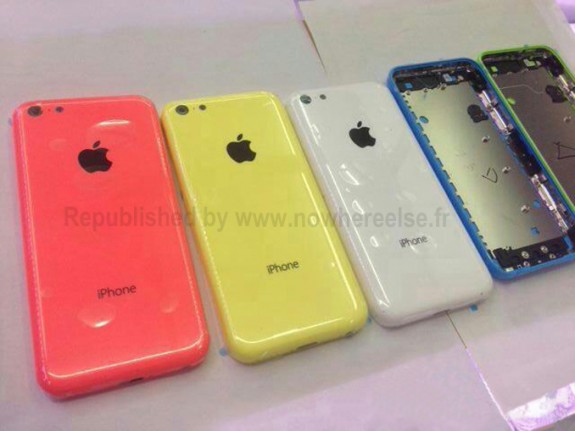 Given the fashion-oriented nature of these iPhones, I do question if they will have as good of a staying power as iPhone models in the past.

Studies of the second-hand market show that iPhone models hold their value better than Android counterparts, suggesting that the iPhone’s elegant design helps to soften the depreciation as older models don’t appear too aged. On the other hand, Android phone manufacturers introduce models in constant succession, and models have wildly different designs whenever they are introduced, which diminishes the value of older models greatly as they will look dated compared to newer models.

However, by introducing colors, Apple is walking down the line of creating fashion fads, and such a move could mean that these models may not hold their value as well as the more classic models in black and white from the flagship range.

The brightly colored models follow the path that Nokia had led with its bright hues on the Lumia range.