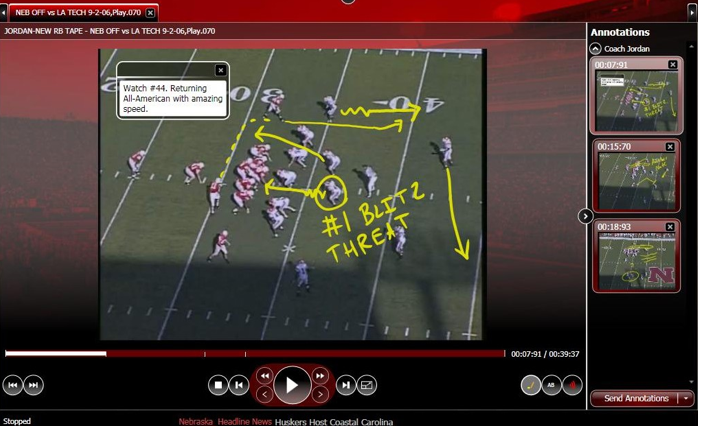 When the University of Nebraska hits the field this fall, they will have a new weapon in their arsenal of preparedness: Agile Sports Technologies Huddle Systems.

Huddle Systems is a sports application first developed by several students in the University of Nebraska-Lincoln’s J.D. Edwards Honors Program. The application uses tablet pc technology to record comments and annotations on top of video and pictures to help the player review past plays and learn the teams playbook.

Here is a snippet from the Omaha.com newspaper describing the program. In addition, Microsoft wrote up a whitepaper on the technology behind Huddle Systems that can be downloaded here.

In the past, Nebraska coaches sent thick three-ring binders full of formations home with players so they could study plays and coverages.

With a computer program developed by Agile Sports Technologies, a company started by former athletic department employee and UNL student David Graff and two classmates, coaches now can use video to show plays in motion on a computer.

Voice recordings, written comments and scouting report information can also be loaded on to players’ computers to complement the video.

Nebraska became the first school to use the software when coaches, quarterbacks and safeties started in June. Other positions will be using it as the 2007 season progresses.

Hmm..wouldn’t an InkShow from a Huskers football game be a great idea???