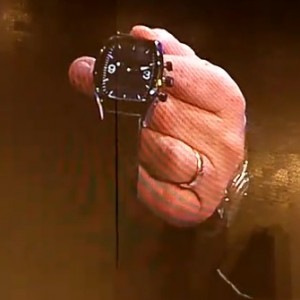 As you may recall, back in August, HP CTO Phil McKinney was caught on camera playing with a trio of unnamed, unseen gadgets. Two have turned out to be the HP Touchpad and a phone that, based on size, is probably the HP Pre3. The third was an unnamed watch-like device, which turns out to be a watch with some connectivity magic tentatively called a “MetaWatch”. (Edit: misquoted as “Metal Watch”.)

In the YouTube video below (skipped ahead to the relevant part), McKinney shows off the watch, which could be a prop for all we know, and mentions that it can act as a hub of sorts for interconnecting other webOS devices and connecting to the cloud to “monitor and manage information”. Sounds cool, but I think it will run into a couple of adoption challenges.

First, wristwatches aren’t so popular now that almost everyone carries a phone that can show the current time. I learned nearly ten years ago that none of my peers from back home wear watches anymore (I don’t either). Second, a lot of kids don’t know how to read analog clocks, so if it’s ever released in however many years it takes, expect the first version of the Metal Watch to be digital.