Air Dictate from Avatron brings the great speech recognition of Siri to your Mac. You’ve heard the Avatron name before. Avatron also offers Air Display – an app that turns your iOS device into a secondary monitor. Thanks to the new app you can use Siri dictation on the Mac using your iPhone as a microphone.

Air Dictate recognized my speech nearly flawlessly. The accurate dictation means you can type into any app that receives text using your voice and an iPhone 4S. For example, I’m dictating this sentence using the program. It enters the text into whatever Mac software currently active. I’m typing this into a blog editing program called MarsEdit. This sentence was dictated into Microsoft Word, and copied over into my blog editor. I had to copy and paste the sentence manually, but other than that, it recognized my words perfectly. The app made only one mistake. It misspelled my last name. Siri does the same thing. 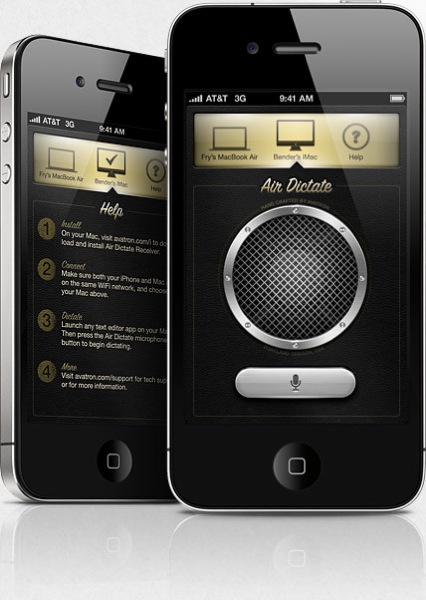 Not a New Idea

Air Dictate costs much less than MacSpeech Scribe, and it provides almost instant dictation instead of having to download a WAV file. With Air Dictate you also save $149.

You can’t dictate while away from your computer, like you can with Nuance’s solution. If you need to dictate away from the computer, you will sill have to drop the big bucks for MacSpeech Scribe. If you do all your dictating while at your Mac, Air Dictate works great. 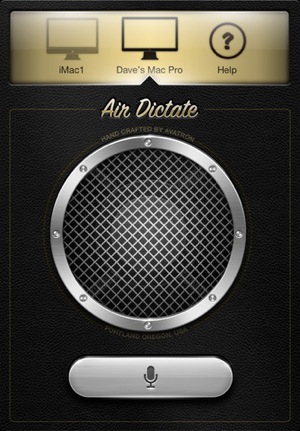 To get started, download Air Dictate Receiver on your Mac from Avatron. Unzip the file and place it in your Applications folder or wherever you want it and start it up. Your computer is ready to receive dictation from the app.

After installing the $.99 Air Dictate app from the iOS App Store, start it and read the four point help screen that the app displays the first time you launch it. At the top of the screen will be a rectangle with all the computers on your network running the receiver app. Select your computer and the app is ready. You will see what looks like a wind screen mic above the Siri mic button.

On your Mac make sure your text app is active and ready to receive the dictated text. Tap the Siri mic button in the app on your iPhone 4S and start talking. After a sentence or two, tap the button again and the app sends the text to the computer.

They system works with any program you can type into. I tested it with my blog editing software, Microsoft Word, Text Edit and the search box of Safari. The program handled all of my dictation nearly perfectly.

You will have to have an iPhone 4S and a Mac. There isn’t a Windows receiver app and the iOS app won’t work on older iPhones, the iPod Touch or iPad. Finally, both the iPhone 4S and the Mac will need to be on the same network. The app can’t control your computer, like Dragon Dictate does. For example, you can’t tell the computer to copy text and paste it or to load software. Also I wish Avatron would create a single app that will act as the receiver for Air Dictate and Air Display.

Thanks to this little App, I won’t likely be using MacSpeech or Dragon Dictate much anymore. I also don’t have to bother with headphones because I always have my iPhone with me.

I can wholeheartedly recommend the app. You won’t find a better speech recognition system without spending a lot of money. The only reason to go with a more expensive solution would be if you also need to control the operating system to tell your computer to fire up apps or perform other tasks besides speech recognition.