AirCover Brings Security and Find My Phone to Android

AirCover secures Android phones and tablets, protecting them from the increasing threat of malware. It also adds an Apple Find My Phone style of protection against theft or loss, and costs $20 per year. That’s a competitive subscription price in the growing Android security market.

AirCover (free) compares favorably to Lookout Mobile, one of the most popular Android security apps. Both offer malware protection and the Find My Phone style of theft protection, but LookOut costs ten dollars more per year without adding many features..

The central uses of AirCover include Anti-Virus, Anti-Theft, Privacy and Web Protection. We found that it comes with a fast and simple interface that’s pretty easy to use. 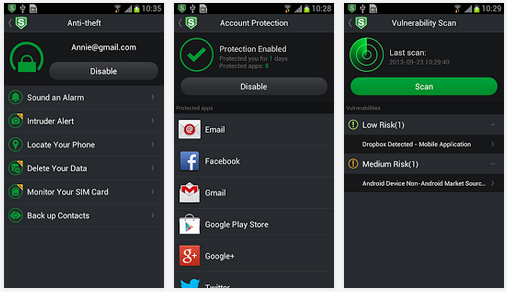 Android users can download the free app from the Google Play Store, but there’s also a $20 subscription upgrade which adds some significant features. The upgrade adds anti-surveillance. That means it warns the user when an app or service might spy on the user during phone calls or web surfing. The app pops up a warning if one of these potentially risky apps launches.

The premium web protection will keep users safe from phishing, fraud, harmful sites and malware as the user surfs the net. We never saw a warning while using it for a few days, so it’s hard to know if the app protects well.

If a thief steals a phone running AirCover, subscribers to the premium version can instruct the app to take a picture using the front facing camera. It also wipes the phone’s data, which safeguards personal information stored on it. The user must turn the remote wipe and theft features on after subscribing. When the phone gets lost or stolen, they go to myaircover.com to find the phone (see above), sound a very loud and annoying alarm while taking a picture of the potential thief, lock or wipe the phone remotely and back contacts up to the service’s cloud storage. The remote contact backup feature only saved some of our contacts. We suspect it won’t save Google contacts since they’re already saved online. The alarm, photo and location features worked perfectly.

The feature that snaps an image of the thief does so covertly. While testing this feature I assumed it failed. Then I opened my email and found an image the phone had taken without my knowledge.

The app helps with performance by closing unused apps running in the background hogging resources. This can help a little, although Android does a better job of resource management than it did in the early years. 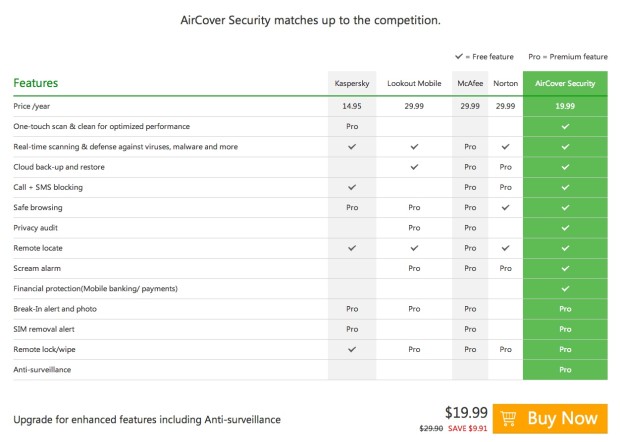 Some might balk at paying $20 for an app subscription, but compare that to the other big names in Android device protection. AirCover’s sale price costs $5 more than Kaspersky, but backs up contacts and sounds an alarm if instructed to do so.

AirCover works great and costs less than the competition. It also offers more features. We think its worth the $20 to protect the phone and it’s user.