Bluexbox Avionics is planning to roll out an in-flight entertainment system in the form of an iPad this summer. According to the company, one international airline has already signed up and it will begin selling the system to others this summer. 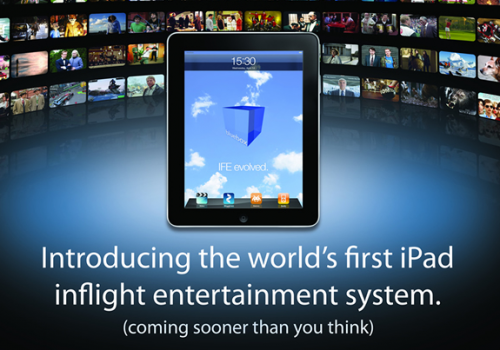 The company is calling the system Bluebox Ai, which will presumably be centered around some kind of fancy iPad app. According to CNET, passengers would be able to stream content to iPads throughout the flight, not just when jets reach a desired altitude. Current movies, games and apps could be loaded up on demand rather than having to watch the handful of flicks usually offered by airlines.

In theory Bluebox Ai sounds pretty cool, but I’d be very surprised if airlines started handing out hundreds of iPads on each flight. The devices are expensive and I’m not sure how airlines would keep them from being stolen. Then there’s the whole problem of them being damaged in-flight. Other personal In-flight entertainment system, such as Virgin America’s RED, are secured to seat-backs for good reason. Passengers wouldn’t get the full iPad experience if they couldn’t hold them. Maybe they’ll be tethered?

Regardless if Bluebox Ai is a hit or not, I hope more airlines start paying attention to passengers’ digital needs when traveling. Flying on a carrier that has a good in-flight entertainment system, in-flight Wi-Fi and AC outlets is more enjoyable and can make the dash to the airport less stressful. In my experience, Virgin America has the best in-flight system of any domestic airline I’ve flown on. Cathay Pacific has a similar entertainment system and its planes are well-equipped for geeks.