With the Xbox One and PlayStation 4 launch dates less than a month away, users are starting to get really excited about the features that the new consoles will bring. It appears gaming PC maker Alienware is looking to capitalize on some of that excitement with a few new tricks of its own.

The program is great news for anyone thinking about leaving the comfortable but locked down environment that is gaming on a console. PC gamers typically pay less for most games through popular services like Steam. They also aren’t required to repurchase their entire collection of controllers and headsets every time there is a generation reset.

On the other hand there are other things to consider. PC gamers routinely upgrade graphics cards so that they can get the best experience for newer titles. They also have somewhat of a smaller AAA big-budget games line-up to choose from. For example, Grand Theft Auto V, the fastest selling entertainment product in the world, isn’t yet available on the PC. 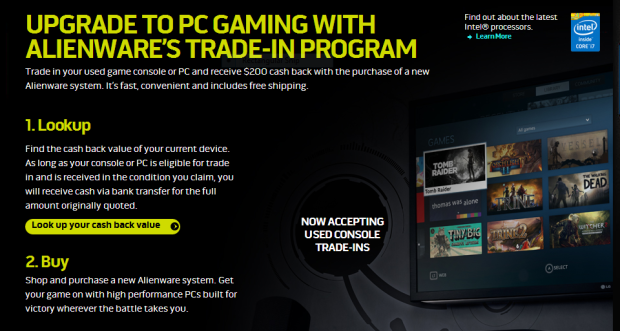 Users have to purchase one of Alienware’s gaming PCs, then ship the console they are trading off to Alienware for credit. Alienware is also stipulating that users have a bank account registered in the United States to receive their payoff.