Traditional living room consoles, that is consoles that provide users with an integrated end to end-user experience like the Xbox One and PS4, weren’t the only thing that got users excited last year. Game developer Valve formally announced its Steam Machine initiatives last year too.

Essentially, Steam machines consist of two different parts. There’s SteamOS, the operating system that Valve has created on top of Linux. The software is a blend Linux and the Big Picture Mode PC software valve previously created for PCs. Valve is also soliciting developers to build out a SteamOS compatible games library. 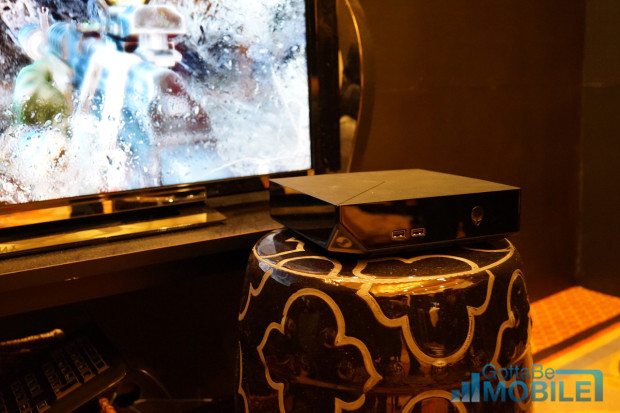 The second part of the Steam Machine’s equation is the console itself. Valve will allow device makers to create their own hardware and ship it with SteamOS and the company’s proprietary controller. That’s where the Alienware Steam Machine comes in.

Read: Valve Seeks to Bust Up Sony and Microsoft’s Duopoly with Steam OS

Alienware showed off its Steam Machine hardware at this year’s Consumer Electronics Show, inviting show attendees to get some hands on time with the hardware it intends to ship sometime this year and the Steam Machine controller that’ll come bundled with every system.

The Alienware Steam Machine itself is a rather diminutive box.  It features two front-facing USB ports, a glowing Alienware logo and a SteamOS logo that also glows when the device is powered on. As Dell wasn’t ready to talk about internal specifications, we don’t yet know how much power is stuffed inside the puck-shaped black box. What we do know is that whatever is inside is able to produce some pretty high-end graphics based off a demo we played. Of course, that isn’t to say our experience with that one demo will be indicative of every game available when the console launches. 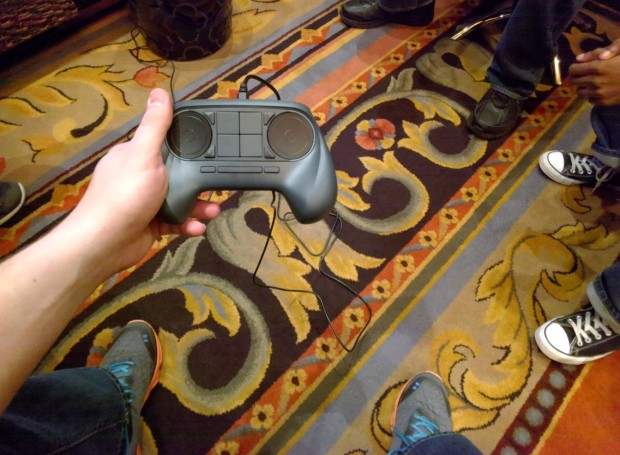 Of the hardware, the SteamOS controller turned out to be the most exciting. Instead of having traditional directional-pads and joysticks, Valve has replaced them with a sort of rugged reverse domed-shaped controller scheme that will completely take users by surprise. As every controller takes time to adjust to, it’s a bit early to pronounce final judgment on the controller itself. On the other hand, I don’t mind saying that I’m not a fan so far. Moving my fingers around like I was using a touch pad felt too complicated.

Also, the plastics that the controller were made of felt utterly cheap in the hand. For a guy who uses the Xbox One controller on a day-to-day basis that’s saying something.

Overall, the Alienware Steam Machine seems like it could be a solid device, but until we’re closer to launch its impossible to pass judgment. One thing that did surprise me was Alienware’s apparent decision to not differentiate their Steam Machine from the mountain of other SteamOS-powered devices that are also coming later this year. It appears that the company has no plans to introduce its own line of accessories. It won’t modify the operating system in any meaningful way either, according to representatives GottaBeMobile spoke with.