All My Storage: An App to Access Dropbox on your Surface RT

If you’re a Dropbox or a Box user with a Microsoft Surface RT you are kind of in a wait and see mode. The folks at Dropbox are supposedly working on an App to work with the Surface RT, but we don’t have a release date at this point. I haven’t heard anything from the folks at Box. For many these third party Cloud solutions are a valuable resource for Cloud storage of documents and syncing those documents back and forth between multiple devices. On any Microsoft device going forward they will be competing with Microsoft’s own Cloud solution, Skydrive, that works very well on Windows and also on other platforms. But if you’ve made an investment in Dropbox or Box, chances are you might want to stay with that third party Cloud alternative.

I discovered an App that works well on the Surface RT that allows you work with your Dropbox or Box files. It’s called All My Storage Pro. Essentially it allows you to sync up various storage options in one interface so that you can access your files from various sources. You’ll notice from the picture below that I have both Dropbox and Skydrive synced. At the moment the only online accounts you can sync include Dropbox, Box, Skydrive and your local storage. 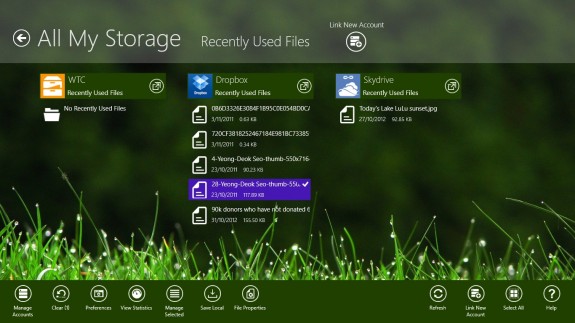 When you select a document you’re given a choice of which App you wish to open the document in (Word, Excel, Notepad, etc…) and in most instances currently you’ll open document files in the Desktop mode on the Surface RT. That may change if other Apps appear for Windows RT in the future. If you are opening pictures or other media, they should open up in the RT or Metro Apps such as Pictures, Video or Music which allows you to stream that content from your Dropbox account. (I have not tried this with Box, so I don’t know if that streaming functionality works or not.)

You can upload documents to your accounts as well, but so far All My Documents isn’t registered with the Share function, so you’ll have to upload your files by selecting the upload function from within the App. 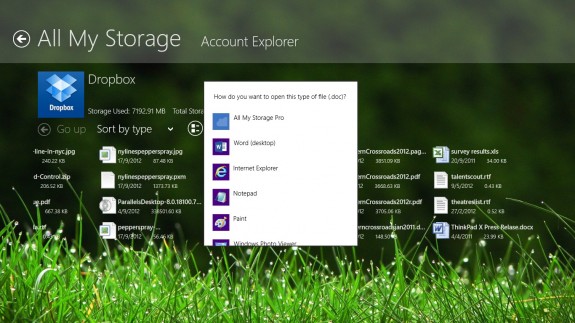 All My Storage Pro costs $2.99. There is a free version that is ad supported.