A display that is allegedly the display that will be found on the upcoming iPad Mini has leaked out. If it’s the real thing, it looks like the iPad Mini will indeed have a 7.8-inch display, the same size that has been rumored in the past.

Gizmodo has unearthed a display that is rumored to be the display of the rumored iPad Mini, a device that Apple has been rumored to be launching later on this year.

The display measures 7.85-inches diagonally which adds up with the display size rumors that have been swirling around about the tablet’s display. 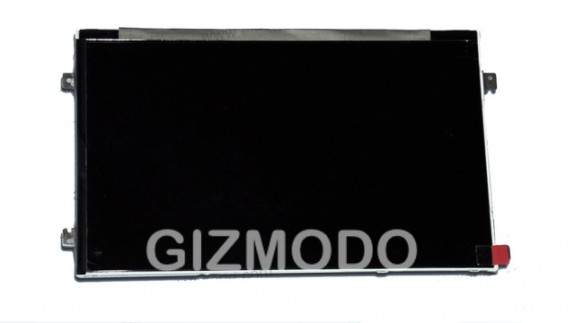 This could be the display of the iPad Mini.

At this point it’s impossible to confirm the display’s authenticity as rumored Apple parts seemingly pop up on a daily basis and we likely won’t know if they will show up on a final device until Apple makes the hardware official.

This new leak comes just a day after a report claimed that the iPad Mini would resemble a large iPod touch complete with small bezels on the sides, separate volume buttons and a microphone on the back.

The lack of a bezel would likely make it easier for users to hold the iPad Mini from the back. However, it would also make it a bit more difficult to hold when in portrait mode because with a smaller bezel, wandering fingers could potentially trigger the touchscreen.

Other possible features include a front-facing camera, or no camera at all. 4G LTE data connectivity and a release date sometime after the release of the iPhone 5.

It’s unclear if Apple will launch both devices at the same September event or hold another iPad event separately.

As for the rest of the iPad Min’s specifications, most remain unclear. We have heard that the device might come with at least 16GB on board though we imagine Apple will offer the device with several storage options.

The device is also rumored to have Apple’s new dock connector on board, something that seems to have been confirmed by our engineering samples. It’s unclear if the dock connector will be 8-pin, 9-pin of 19-pin however.