The meme of the moment and the debate of the day is all about which new iPad one should choose. iPad Air or iPad mini with Retina Display? There are virtues to both. There are no real downsides, just personal preferences and use cases that might reflect the size differences. I’m watching tech pundits from all over filibuster, genuflect, and hem and haw while trying to rationalize their choices between the two. Some are wrestling with inner Shakespeares as they describe their inner doubts. Let’s not forget “our doubts are traitors.” (Measure for Measure Act 1 Scene 4). I’ve gotten several emails asking me which one is best. Admittedly if you have to pick just one, which is the case for most human beings, it can be as tough a decision as picking between two quality brands of scotch or deciding to go with yams or sweet potatoes this Thanksgiving. 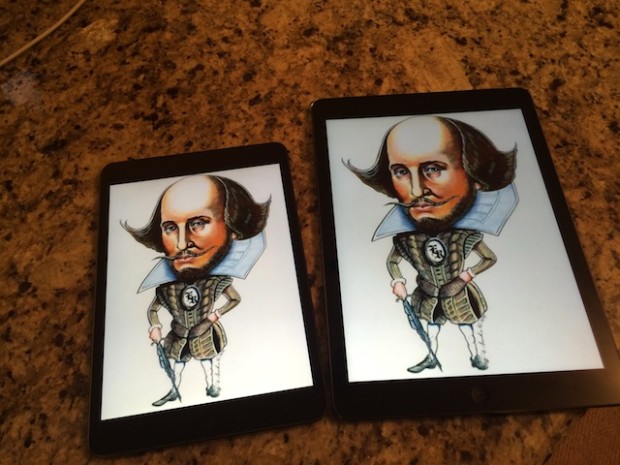 Both the iPad Air and the iPad mini with Retina Display are excellent, top of the line devices. They both have cutting edge processing power, great looking screens, take advantage of an enormous ecosystem, and offer great and mysterious promises of things to come with a new 64 bit architecture and instruction set just waiting for developers to build on. The only real fundamental difference is size.

Read: Comparing the iPad mini with Retina Display with the Original iPad mini

Shakespeare liked marooning folks on islands and in strange countries. So, let’s pretend you are voluntarily marooning yourself on a desert isle. Setting aside for the moment that desert isles probably don’t have WiFi, broadband, or charging stations, if you were asked to pick just one to take with you to said desert isle, making that choice may not be easy. These two new editions to the iPad family have come closest to being as perfect a Tablet as I could imagine at the moment.

But maybe the choice for your island isolation between these two iPads doesn’t require an inner Shakespeare to work out. I don’t think it is as existential a choice as some would make it out to be. Some decision points are pretty clear in my view.

The label that got pinned on the early iPads was that they were portable not mobile devices. The size and weight were the factor. When the iPad mini came along the shortcut definition of the day was that it was the choice for the mobile warrior. Mobile warriors, so the theory goes, are willing to compromise on features like Retina Displays and performance in favor of size and mobility.

I think that is still largely true now if not more so. The compromises that came bundled with the original iPad mini have been erased. If size and mobility are your governing decision points it’s actually an easier choice than before. I also think there are some other easy determination factors.

Do you have big hands? If so, the iPad mini with Retina Display may not be the choice for you. Apple’s touch UI is pretty good but it is difficult at times to hit Touch targets on the smaller screen.

Do you use a Tablet primarily as a reading device? We each use Tablets in our own way. Reading is one of them. If you do a lot of reading and don’t use a Tablet as a work machine or a game machine then the iPad mini with Retina Display might be the right choice.

Are you a gamer? This is a tougher call. Both iPads now perform brilliantly. You can bet we’re going to see more games coded for the new platform down the road. The question here is simply what size of a window into your games do you want. I’d argue for the iPad Air here, but if you’re a gamer who is on the road a lot, the iPad mini with Retina Display could fill the bill.

Are you an artist? A Digital Ink note taker? In my view the the iPad Air is a better device to use with a stylus. You’ve got more screen real estate to work with and don’t have to use the zoom feature that often comes with many an App to do detail work.

Do you want to use a keyboard with your Tablet? The iPad Air, in my opinion, is a better choice. While keyboard makers have come up with nice accessories for the iPad mini form factor, the case and cover models are smaller and more cramped by necessity, unless you opt for separate full-sized keyboard like the Apple Wireless keyboard. 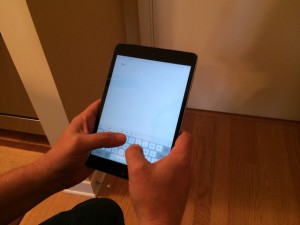 Are you a thumb typist? If you like to type a mile a minute with your thumbs the iPad mini with Retina Display is the more conducive size to move your thumbs across a virtual keyboard.

What are your video watching habits? Again a tough call. If you use an iPad to watch video from Netflix, Hulu, via a Slingbox or HBO Go, it all depends on the size of the screen you want to view and where you’ll be doing that viewing. Mobility plays a factor here. If you use your iPad as an extended remote with your home theatre, again it’s all about size preference. I’ve watched my wife enjoy using the Xfinity TV remote App to schedule DVR tapings of her favorite shows. It sure beats listening to her complain about using the darn remote and guide Comcast offers.

Will your iPad be a family device? If you’ve got a family with small children that toss Tablets around like tinker toys you’re obviously going to put the iPad of your choice in a protective cover or case to prevent damage. Purely subjective thinking here, but I believe the iPad Air is the better choice because it will be easier to find under the sofa or in the toy pile.

Do you make music? Create and/or edit video? The iPad Air is the easier choice here simply because you have more screen real estate to work with.

The above is just a list that contains some objective, but also very subjective thinking on my part. But keep in mind, one of the beauties of Tablets is that they aren’t single purpose devices. They are windows into your world and offer a range of opportunities that you might not even think of when making a purchase. Any iPad user could slide amongst any and/or all of the limited list of use cases above.

So, enough hemming and hawing. If I had to choose between one of these two excellent iPads, the iPad Air or the iPad mini with Retina Display which would I choose? The iPad Air.

Why? I never felt the original iPads were too large to tote around. And in my use case if I was going into a situation where I didn’t want the size with me, I just relied on a phone. Once the original iPad mini was released that changed for me. I toted the iPad mini around to more places than I would have with a full-sized iPad. As an example, if I attended a movie I would take the iPad mini along to use while waiting for the flick to start. I used to use my phone for that sort of activity.

But the size dynamics have changed with the new iPad Air. It is sleeker, smaller, and just feels great in my hands. I can slide the device with a keyboard into a sleeve built for the original iPad and head out the door. I don’t think I’ll tote the iPad Air to a movie theatre, but it will be an easier choice to use for reading in coffee shops and restaurants than its predecessor was. And, gosh darnit, if I’m feeling guilty about not getting work done, I can do that a bit easier too.

I’m also a digital note taker and a sloppy Inker. So the larger screen real estate makes sense for me. And I prefer a larger screen for the video I’m watching. I also do work as a theatre director and use an iPad as my script in rehearsal. I’ve tried both form factors in those situations and am more comfortable with the larger device. Curiously the size of the mini is just about the same as play scripts that come from licensing houses. I also write a lot and use a keyboard. I find the options for the larger sized iPad more conducive to my typing style.

So, that’s my reasoning for choosing to take the iPad Air along to a desert isle. Yours may be completely different. Quite honestly, you’re not going wrong with either choice. These are top of the line devices any way you slice it.

Let us know which new iPad you might be choosing and why. I’m sure this debate will go on for some time now.

Oh, one more reason for taking the iPad Air with me to a desert isle. If I need to signal a rescue ship I’ve got a larger screen to use as a signal beacon.