So, Google announced this whole Chrome OS idea back in 2009. A laptop OS that would allow users to jump right onto the web. And nothing but the web. There were promises of awesome web apps that would run from the cloud. People were excited that Google was jumping into this arena.

Late last year, Google started shipping thousands of Cr-48 laptops to developers and reviewers. Skeptics discounted the idea, stating that netbooks and tablets running on Windows 7 and Linux already filled the void that Google was hoping to fill.

As reviewers started to receive these prototypes, there were mixed feelings. Some loved them and the idea, some found them to be redundant and wondered if “regular” consumers, as opposed to geeks like me, would actually drop cash to buy one. A single device that only allows you access to the web and web apps. A laptop that can’t handle complex work tasks. A mobile device that becomes a paperweight when you have no WiFi or cellular data coverage. I know I wasn’t very interested initially.

Here’s a video from Google from 2009 that explains Chrome OS:

Well, I never got my hands on a Cr-48 like Xavier did, so I moved on with little excitement. Xavier did get his hands on one and shared tons of experience with GBM.

As you can see, around Part 4 in Xavier’s series of reports, he started to get the idea. Nobody is going to buy this. Expensive data plans, expensive hardware, crappy apps, etc… there is too much bad to overcome the positives.

Fast forward to May 2011, it was announced that these Chromebooks were going to start shipping in June. Well, I was keeping my distance from the mobile industry and didn’t even know this when I received an email from Google. On June 1st, 2011, I got any email stating that they (Google) were sorry I didn’t receive a Cr-48 but they’d like to make it up to me by offering an early retail model. Their great marketing along with my habit of impulse buying had me immediately take advantage of the opportunity to get something like this early. 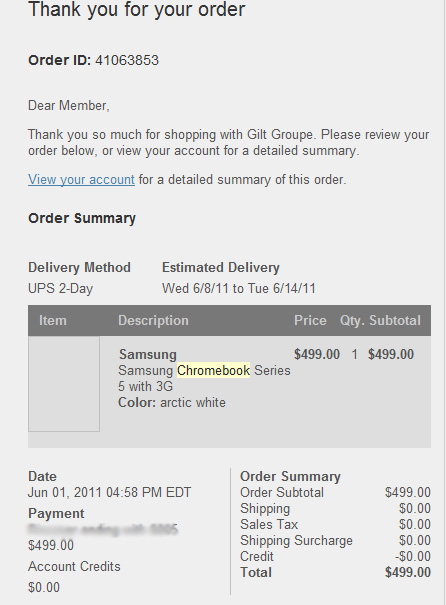 The actual date that Samsung was going to begin sales was June 14th. I jumped all over this. I got home later that evening and thought to myself, “I just dropped five bills on something I will never use….” To top it off, I had no outlet with which to share my Samsung Chromebook experience. Why did I do this? The next morning I attempted to cancel my order, but was told that I agreed to buy it and that there were no cancellations. Doh! I was stuck now.

I received it a week before they were to be available to the public. I had decided to leave it sealed and try to peddle it to my techie followers and friends on Twitter. I had several bites, but they all assumed that I got it free at a Google IO event that happened around the same time frame. They thought since I got it free, I would sell it cheap. Well, I paid $500 and I was willing to take a $100 loss but those that were interested weren’t willing to pay that much. I was truly stuck with this device now. It sat sealed under my desk for a couple weeks.

I finally ended up opening it. I was underwhelmed, but since I was stuck with it, I thought I might as well use it. Today, I use it as a Living Room web browser mainly. I tried to use it for blogging and really couldn’t get much done without a full-featured photo editing package. I tried using Aviary, a Google OS web app for editing photos, but it was slow and didn’t offer the functionality I needed.

Long story short: I have an overpriced web browser slid under the couch for when I need to check something out while watching TV.

The model I bought was the Artic White Samsung Chromebook with 3G and WiFi.

I have to ask:

Am I the only one that bought one of these?