Microsoft’s Xbox One and Sony’s PS4 gaming console aren’t getting any cheaper any time soon. That being said, GameStop is offering Xbox 360 and PS3 users an absolutely spectacular deal when they trade in their older console towards an upgraded counterpart.

From now until July 13th GameStop is guaranteeing users an extra 50% in value when they for their older console towards the Xbox One or the PS4. In short, users can expect to get more credit for successfully selling their old console to GameStop so that it can sell it to someone else used.

To hardcore gamers that extra 50% in trade-in value isn’t going to sound like much, but casual players considering the upgrade should be delighted. For example, trading in an original Xbox 360 with one wireless controller, video cable and the necessary power plug would only net users around $40 today, according to GameStop store officials we spoke with today. Users would need to sell their hard drive separately for additional trade-in value of $4.50. Combined that’s a rough total of $45 in trade in value that users could use towards another purchase. 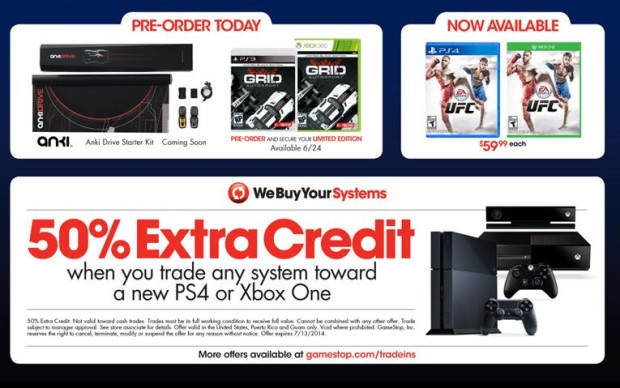 With this new deal in place those trading in an Xbox 360 with 60GB of storage could expect $60 slashed off of the price of picking up an Xbox One or PS4. Of course, users could also trade in their old smartphones, tablets and older games in for extra money off their next console purchase too, though it appears the 50% boost only applies to the actual gaming hardware users trade in. It’s also worth noting that the values reflected here are just for an entry-level Xbox One from late 2008. Later generations of the Xbox 360 and PS3 with bigger hard drives and slimmer profiles can be traded for much more, shaving more off the cost of upgrading to the latest and greatest consoles.

GameStop may be offering other deals but users wouldn’t be able to take advantage of any of them and this deal at the same time, according to the details included with the flyer announcing the deal that the gaming retailer posted to its website. Users thinking about taking advantage of the deal should also take note of a few other details. First, GameStop reserves the right to refuse any trade. That being said, the company will also take broken and defective consoles and games too. Users won’t get as much for those items, but at least they’ll be able to still apply it towards upgrading.

All told, this deal is the best we’ve seen yet for new console buyers. Both the Xbox One and PS4 start at $399. Any deal that helps make upgrading more affordable for current users is a win for everyone. Gamers get the opportunity to experience the exclusive titles they can’t play on their current system like Knack and Ryse: Son of Rome. They also get to clear their gaming room of hardware they likely weren’t going to be touching for a very long time after they upgrade.

Users thinking about taking advantage of the upgrade should note that there aren’t any other deals that come close to this. For comparison, Best Buy is only offering users $20 when they trade in the same Xbox 360 with 60GB of storage space and one controller No deals found on its website would net users the same amount of savings they’re getting here.

Read: Upgrading from an Xbox 360 to an Xbox One: What You Need to Know

Users considering the upgrade should keep in mind that the Xbox One and PS4 consoles themselves start at $399. Purchasing recently released titles for each platform will add to the cost of ownership. That being said, users get free games when they sign up for both Sony and Microsoft’s online gaming services. Membership to either service costs $9.99 a month.