Online world’s like the one video game developer Rockstar Games built into GTA Online are getting more realistic all the time. Still, nothing we’ve ever seen before compares to a new GTA 5 video by Corridor Digital that showcases what it would look like if the famed open-world game took place in the real world.

A new video entitled Real GTA showcases exactly what its title suggests it would. Using visual effects, the video tricks the mind into thinking the in-game state of Los Santos is something they can visit. 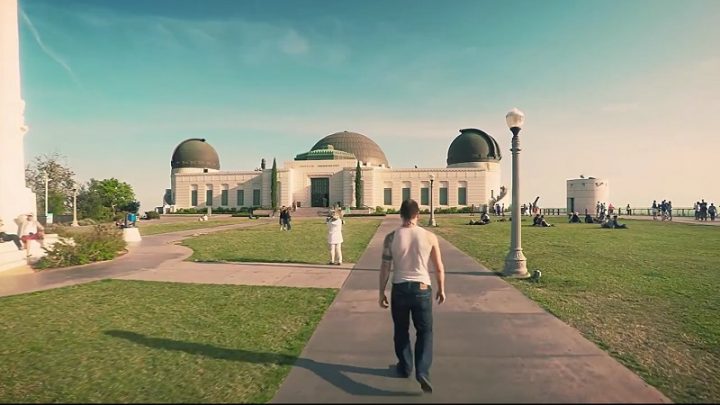 As the video begins we hear music that seems straight out of GTA 5. A man in a white shirt with arm tattoos steps into full view of the game. As he does, the camera pans behind him and we see his location in the bottom-right corner of the screen: Vespucci Beach, which is a location in the game. The game follows this man as he walks down the sunny Vespucci Beach boardwalk like an in-game character would and answers his iFruit phone, which is also taken straight out of the original game. The player follows new orders given to him by his handler on the other end of the call to take out someone on the beach.

The player moves in for the kill. He takes out a bystander near his bike. As the bystander falls to the grown, stacks of money spill from his pockets and the player – or subject the camera is following if you prefer – rides off with his bicycle. A few locations flash by and we end up at the Griffith Observatory. Another player gets knocked out overlooking the city of Los Santos, which is modeled after the real Los Angeles, California. Money falls to the floor and we’re back to following the subject of the video on his bike.

Before ending up in La Mesa, another Los Santos neighborhood, the player jumps off a cliff and does cartwheels in the air as if he’s trying to earn in-game cash for completing stunts. As the play pulls up to a sports car he ditches the bike, the camera begins to turn as he throws a woman out of her convertible and on to the pavement. Driving at high-speeds, attacking random pedestrians even getting ran over by a random driver all look as realistic as possible.

GTA 5 is the abbreviated name for the video game Grand Theft Auto 5. Launched in 2013, GTA 5 is one of the best-selling entertainment offerings in history. It sold millions of copies the week it was released and many million more since it’s been added to the line-up of titles available on the Xbox One and PS4. This past April Rockstar brought GTA 5 to Windows PCs.

Coincidentally, GTA Online, GTA’s multiplayer experience is getting an update on Wednesday, June 10th to add new luxury vehicles and weapons. To afford them users will need to pull off most of the mayhem shown in this Real GTA 5 video.

Corridor Digital created the hyper-realistic video. Corridor Digital didn’t use a character taken out of the game’s story for their video, but created their own. As such, this could be considered their real interpretation on GTA Online.

The company modestly describes itself as a “small team of Internet Video creators.” It’s worked on creating realistic interpretations of video games before for its YouTube channel. In fact, the studio spends  all of its time only creating YouTube videos so that anyone and everyone can watch them for free. To keep the effort going it’s created a Patreon page to encourage donations. Those who contribute to the studio get extras that aren’t available on their publicly facing YouTube page.