With the launch of the Kindle Fire just around the corner, Amazon has gone ahead and released a major update to its App Store for Android that takes it to version 2.0 and adds a variety of changes and a new UI.

The update installs a UI that is congruent with the Kindle Fire in that offers up a ton of gray and black. If you recall, prior to the update, the App Store was swathed in quite a bit of white.

In addition, the update brings the ability to take advantage of In-App Purchases as well as new Parental Control settings to ensure your kid doesn’t stumble upon or download stuff that he or she shouldn’t. 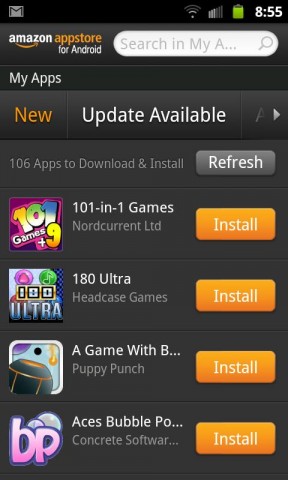 So, if you own an Android phone, are the future owner of a Kindle Fire (you’ll want to bookmark the page) or you just want to have a look, you can head here to learn how to get the App Store up and running on your device.

The Kindle Fire launches November 15th for $200 and it would be wise to read our hands-on with it before you put in an order.