The Amazon Black Friday 2013 deals are already online with a collection of incredible deals that are made even better by the ease of online shopping or shopping from the Amazon app on iPhone, iPad or Android.

The Amazon Black Friday 2013 deals start now, here’s how to track them and get the best deals.

Many of the Black Friday 2013 deals on Amazon will arrive in the form of Lightning deals which are available for a small period of time. During this window, shoppers can add the item to their car to think about licking by for 15 minutes, after that time period it is made available to other shoppers.

If you see an Amazon Black Friday Lightning deal you think you want, add it to your cart as fast as possible because the best deals expire in seconds. After it is in your cart you can compare the deal and look up reviews for a short period. If you miss a Lightning Black Friday deal by a few units you can join a waitlist which will allow you to snag one that someone decides not to buy.

The Amazon Black Friday 2013 Lightning deals will come throughout the day and some will come with a lot of notice while others are surprise deals. For those with notice the deal may take a few seconds to actually show up.

For Gotta Be Mobile team members the Amazon Mobile app is the easiest way to do Black Friday shopping. If you open the app to the Black Friday offerings you can see the items and quickly checkout. The app keeps you signed in and makes the entire process easier.

Follow AmazonDeals on Twitter and Facebook for alerts whenever the hottest deals are about to arrive. Theses accounts won’t post all the Amazon Black Friday deals, but it is an easy way to see the hottest deals as soon as they arrive, including any surprise deals.

If you want, you can turn on mobile alerts for the Twitter account and get a push alert when a new Tweet arrives, but that may be too many alerts for the average user. Follow the directions in this guide to turn on text alerts for every deal AmazonDeals Tweets.

If you want to see what Amazon Black Friday 2013 gaming and movie deals Amazon already shared the list of gaming deals and DVD and Blu-Ray deals. 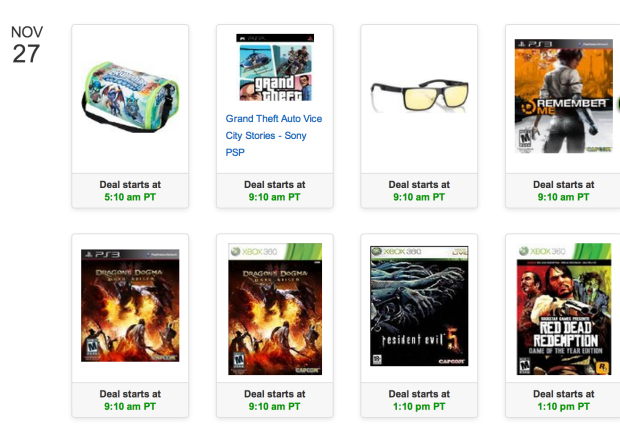 Amazon offers a list of many gaming deals that will arrive through the week, including approximate starting times. While these deals don’t show the exact price it is a great way to look up the current price and read reviews of accessories and games.

As Thanksgiving and Black Friday arrive we should see additional lists like this show when and what will go on sale on Amazon.

Check out our additional Black Friday 2013 coverage to see where the best deals are.